Excellent, original WWII Remington Arms Model 1903 rifle produced in July 1942. These 1903s were originally manufactured for England starting in May 1941 using the old RIA tooling and machinery and were then redirected back to the U.S for its own wartime use after Pearl Harbor. There were three versions of this rifle: the first version looked like a 1903 Rock Island Arsenal rifle, the second version like a 1903 (Modified) version, like this example, and late model with stamped components which evolved into the 1903A3. This rifle was termed as a "modified" model as it used wartime improvements or shortcuts in the manufacturing process to speed up production of various parts. These rifles in original condition are extremely rare as all were shipped to Great Britain via the Lend-Lease program, the Far East with the Marines, or with the Army into Europe. Survival rate of original rifles is almost nonexistent, making these an extremely hard 1903 rifle variation to find in unaltered condition. The receiver has the standard markings: "REMINGTON MODEL/1903/3170822," and the barrel is marked "RA/Ordnance Bomb/7-42". Original, early two bolt and "S" style, straight grip walnut stock and handguard. The left side is stamped with an original crossed-cannon and boxed Remington "RLB" cartouches, and a single circled "P" proof is in the grip area. It has all the correct "early milled" Remington parts such as the barrel bands, complete trigger housing assembly, smooth face buttplate, trigger and sear and the early smooth body bolt and cocking knob assembly. The early smooth body bolt, complete milled rear sight assembly, cutoff, extractor and cocking assembly all have their original Remington "blued finish", and the other parts have their early original green Remington parkerizing. All the blued and parkerized parts are correctly stamped with a "R" for Remington Arms. The consignor stated that he has had this rifle for over 30 years, so it's fresh to the market.

Excellent with 99% of the original Remington green parkerized finish with only minor edge and high spot wear and finish loss on the edges and face of the buttplate. The stock and handguard are in near excellent condition with a deep brown matching color overall showing only a couple of very minor handling marks. The stock cartouches and proofs, as noted, are sharp and distinct. The only detriment to the stock is that at some point a small piece of wood was chipped out in front of the trigger guard. The original wood piece was retained and reglued back in place, and both pieces (the chip and the stock) still retain their original color and oil finish; however, you can see the outline of the wood. This is still an exceptionally high condition, early Remington Model 1903 (modified) rifle that is almost always missing from advanced martial rifle collections. 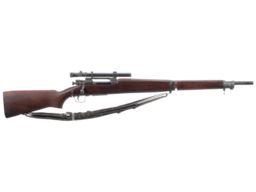 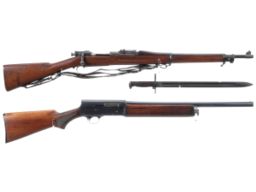 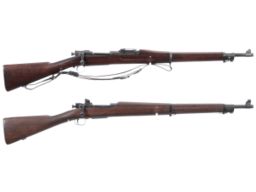 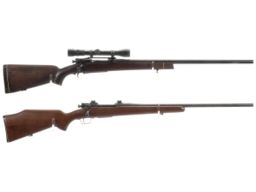 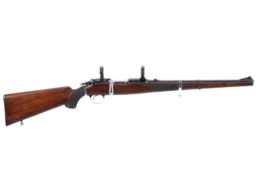 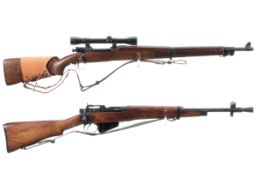