Originally manufactured in 1902 and later gold inlaid and engraved by Master Engraver J. Lowe who was employed by New York City based luxury jewelry and specialty retailer Tiffany & Co. as late as 2013. Other known J. Lowe work of the same high caliber craftsmanship has been seen on Winchester and Marlin lever action rifles. The rifle is equipped with a raised beaded blade front sight, an elevation adjustable King rear sight, half octagon barrel and 3/4 magazine tube. The barrel has the two-line New Haven address marking on the top flat ahead of the rear sight and "38-55" on the top flat at the breech, engraved scrollwork and double inlaid bands (one gold, one silver) at the breech and a single gold inlaid band at the muzzle. Additional engraved scrollwork is found on the receiver and takedown ring. The scrollwork on the receiver is featured profusely on the sides while wedges of scrollwork appear on the chamber and behind the hammer. Note that the scrollwork on the receiver incorporates a large entwined geometric pattern on the left side. The sides of the receiver also have highly detailed gold inlaid woodland game scenes: a stag and doe on the left side and a moose on the right side. Gold inlaid line borders terminating in scrolls appear on the forend cap, takedown ring, receiver, bolt, hammer, carrier and lever. Additional gold inlaid line motifs appear on the carrier. The gold inlaid borders surround the game scenes depicted on the receiver. Additional engraved flourishes (e.g., simple floral and geometric motifs) appear on the forend cap, underside of the receiver, bolt and carrier. The lower tang is signed by Master Engraver J. Lowe just behind the trigger. The hammer and lever are casehardened. The takedown release is unmarked. Mounted with a highly figured and fancy checkered forearm and pistol grip stock fitted with a Winchester hard rubber grip cap and checkered Winchester hard rubber shotgun buttplate. The checkering on the pistol grip is finer than the checkering on the forearm.

Near mint as professionally custom embellished by Master Engraver J. Lowe. The rifle retains nearly all of the blue finish showing some minor thinning and a smooth gray patina on the forend cap. Nearly all of the case colors remain on the hammer and lever. The wood is near mint showing a few minor handling marks. The checkering is crisp overall. Mechanically excellent. 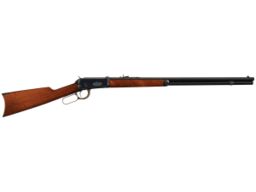 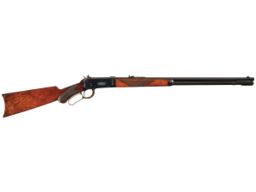 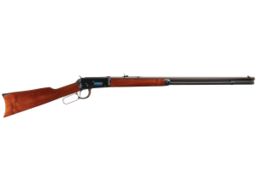 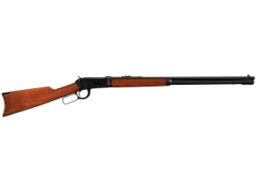 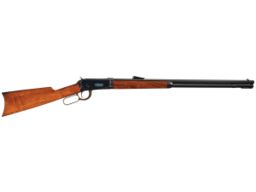 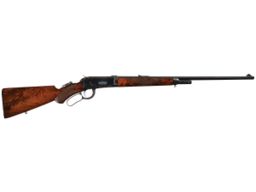