At the beginning of the Civil War the Confederate government entered into a contract with S.C. Robinson Arms Manufactory of Richmond, Virginia, to manufacture Sharps-like breechloading carbines. Collectors have identified two basic models of Robinson carbines: a First Type and a Second Type. Approximately 5,000 carbines of both types were manufactured from 1862 to 1864. This carbine is a Second Type which was made for the Confederate government after their purchase of S.C. Robinson's factory in March 1863. Second Type production lasted about one year and an estimated 3,000 Second Type carbines were manufactured. The serial number range for the Second Type is approximately 1,900 to slightly over 5,000. These carbines are modeled after the Sharps Model 1859 and were less crudely built than many other Confederate weapons but still saw extremely hard service during the war. In fact, some experts have concluded that the quality compared well to the Sharps Model 1859 carbine. Speaking to the quality of these carbines, Authors William Albauch and Edward Simmons stated that the Robinson carbine "was one of the best weapons ever to be produced in the Confederacy. The record of its production is something in which its operatives can take pride, a fact not so with most of the arms manufactories in the South" ("Confederate Arms," page 65). These carbines lack a pellet primer device as found on U.S. Model 1859s. The top of the barrel has the Second Type marking of "RICHMOND VA" stamped behind the rear sight. Due to Second Type carbines being made under Confederate government supervision, these carbines lack S.C. Robinson markings. The carbine is equipped with pinched blade front and fixed notch rear sights. The rear of the lock plate is marked with the serial number "3060." The right side of the forearm has an old paper label marked with the number "785." The single barrel band and buttplate are brass. A saddle ring bar with ring is mounted on the left side. The carbine is mounted with a straight grip stock featuring a sling swivel on the underside.

Very good plus, well above average for a confederate weapon. The carbine has an untouched smooth dark patina overall. The barrel band spring is missing. The brass has an aged patina. The wood is good with some cracks on the forearm (longest 3 inches long), some chipping along the grain and some minor pressure dents and scratches. The lever is loose but action cycles with the hammer able to hold at the half and full cock positions. A nice example of a rare Confederate carbine that would add value to any Civil War arms collection. This is a solid example of an important piece of Civil War history. 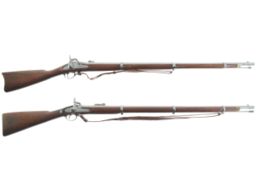 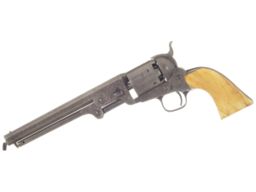 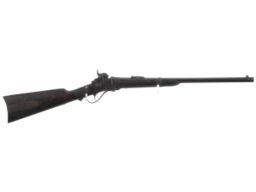 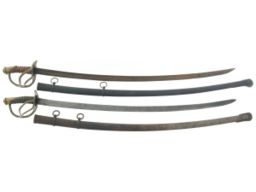 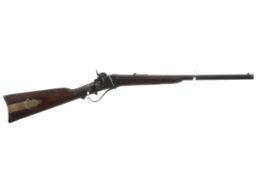 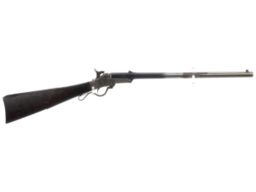