Manufactured in limited quantities at the turn of the 20th century, the Webley-Fosbery uses a novel recoil driven operating system. The pistol is divided into two main components; an upper frame carrying the barrel, cylinder, and the hammer is mated to the lower grip frame and single action trigger and disconnector assembly on a spring loaded track. On discharge the recoil energy drives the entire upper frame back along the track recocking the hammer and advancing the cylinder. This example is chambered in scarce .38 ACP caliber. A total of 417 of these revolvers were originally manufactured in .38 ACP, but it is estimated that only 200 left the factory. The accompanying serial number research letter from Richard Milner Ltd. states that the revolver was sold by P. Webley & Son on September 19, 1903, to The Army & Navy Co-operative Stores Limited of London who sold the revolver to Major Campbell of the Indian Army on February 16, 1904. Major Campbell is General Sir Frederick Campbell (1860-1943). When he bought the revolver in early 1904, he was serving as the commanding officer for the 40th Pathans (1899-1906), an infantry regiment of the British Indian Army. While with the 40th Pathans, he participated in the Younghusband Expedition to Tibet (December 1903-September 1904). This expedition was a British invasion for the purpose of resolving a border dispute between Tibet and Sikkim and originated out of fears of a perceived Russian threat to British interests in India. The march to Lhase in August 1904 (which Campbell took part in) caused the Dalai Lama to flee to safety, ironically to China. Other career highlights include: second in command during the Malakand campaign in 1897 and during operations in Mamund country from 1897-98, and commanding officer of the Guides Infantry, Buner, North West Frontier in 1898 and 1 Peshawar Division from 1915-1919. He retired in 1920. The frame has "WEBLEY FOSBERY" and the W&S winged bullet logo followed by "38 AUTOMATIC" on the left side and an overstruck serial number on the right side ("7336" over "1126" believed to be a factory error; factory letter has serial number "1126"). The barrel is marked "ARMY & NAVY CSL." The leather flap holster is unmarked.

Very fine. The revolver retains 80% original blue finish with the balance thinning to a gray. The grips are very good with a couple missing minor chips, some minor pressure dents and scratches and some wear in the checkering. Mechanically excellent. The holster is very good showing minor flex wear and overall tight stitching. A rare opportunity to acquire a Webley Fosbery self-cocking revolver in scarce .38 ACP documented to being purchased by a British Indian Army Officer just before participating in the Younghusband Expedition to Tibet. 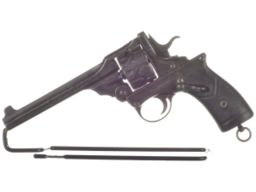 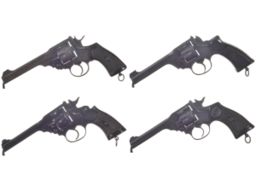 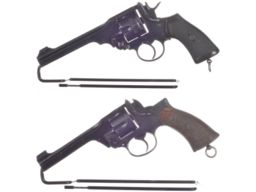 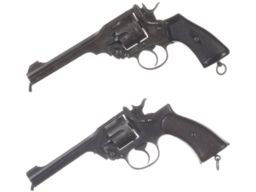 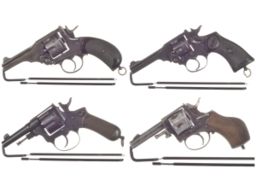 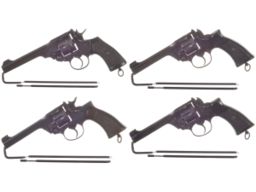