Others have proceeded him but Elvis Presley will forever remain The King of Rock & Roll. He was rock & roll’s first star and remains one of the most important cultural icons in American history since his first number one charting song hit the airways back in 1956. Rock Island Auction Company is proud to offer an exhibition quality Colt Python revolver linked to the Elvis Presley legacy. The revolver was gifted by Elvis to the Director of Security and Operations for Elvis Presley Enterprises Richard Grob. This is a well-documented piece of Elvis memorabilia and includes several documents. The first is a 2015 dated affidavit from Richard Grob. More than a security guard and specialist, Grob was a close personal confidant to Elvis from 1967 until Elvis' death in 1977. Grob explains in the affidavit that he advised Elvis on many of his firearm purchases and accompanied The King to the firing range to shoot an array of firearms from revolvers to full automatic rifles. This revolver, continues Grob, was "a special gift and surprise" given to him by Elvis who purchased the gun from Kerrs Sporting Goods in Beverly Hills, California, and had it engraved by the Fredrick Wilhelm Co. of Germany. In the book "Elvis: What Happened?" by Steve Dunleavy, Elvis buying firearms from Kerrs is confirmed. Dunleavy wrote, "Presley had a real ball giving Kerrs Sporting Goods the best business they had ever had. In just one month he bought thirty-two hand guns, one shotgun and a rifle….The total cost of the shopping spree was $19,792." See page 83 and a photocopy of the page is included. The included Colt factory letter confirms that this revolver was shipped to Kerrs Sporting Goods on 4 January 1967. Moreover, the accompanying 1982 dated teletype lists this revolver by serial number as being registered to Elvis and a transfer date of 27 November 1970. The revolver is documented in the September 1973 issue of the magazine "Guns" on page 36. This issue is included and documents the revolver as being sent to Fredrick Wilhelm Co. of Germany to be engraved and presented to Grob by Elvis. According to Grob, the embellishments were completed in "about a year." Finally, an accompanying letter from "the world's foremost Elvis memorabilia expert" John Heath and a March 15, 2017 dated notarized affidavit from Thomas Morgan Jr., a friend of Elvis and member of the Shelby County Sheriff's Department, authenticate the provenance and history of the revolver. The revolver features 95% coverage of a relief leaf and scroll engraving outlined by gold and silver inlaid scroll borders. This engraving is found on the front and rear barrel sections, vent rib, frame, cylinder and trigger guard. The top of the frame has a cross hatching pattern engraving. The frame has additional five raised gold North American game animals that range in size from a mountain lion to a bison. The barrel markings are in silver inside gold outlined oval panels. The sights are standard factory serrated ramp and adjustable notch. The two-piece grips feature relief carved game animals among floral scrollwork. As evident in Dunleavy’s story, Elvis had a strong affection for firearms. When he died in 1977, The King was reported to own 37 firearms, including one machine gun. While staying at the International Hotel in Las Vegas, he shot a television set in a fit of rage during the airing of "The Mike Douglas Show" when singer Robert Goulet was a guest. The purported TV set has been displayed at Graceland. Also retained at the Graceland estate is a smokehouse that Elvis turned into a shooting range. He was known to give firearms as gifts such as this example. Also of interest is the fact that Grob was a member of the Palm Springs Police Department. Elvis had tremendous respect for law enforcement officers and regularly doted on police officers through friendship and gifts. For more see the Shelby County diamond and ruby sheriff’s badge from Elvis’ personal collection that is in this auction.

Very fine as embellished by a master engraver. The revolver retains 90% of the blue finish showing a few areas of smooth gray patina and some fading to a plum. The grips are also excellent with a small chip missing near the bottom (left panel). Mechanically excellent. A well-documented, fantastic piece of firearm art and Elvis Presley memorabilia that will be the envy to both Colt snake revolver and Elvis collectors. 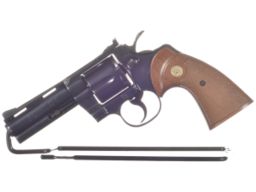 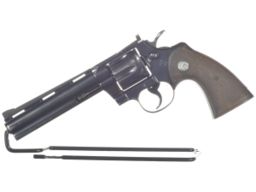 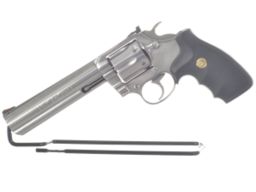 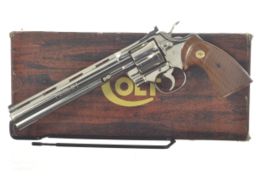 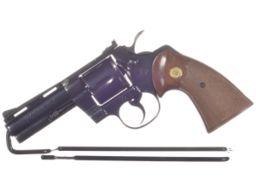 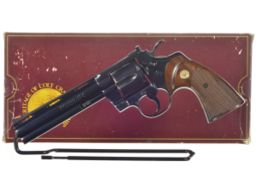