Winchester Model 1873 Saddle Ring Carbine manufactured in 1879. The carbine is accompanied by two Winchester Museum letters dated 1968 and 1985. The earlier letter is addressed to "Mr. H. Garcia" of Monterrey, N.L. Mexico which indicates that this carbine may have originally been sold in Mexico. The second letter describes this carbine as: "carbine, full nickel, engraved" and states that it was shipped from Winchester on September 4, 1879, "with 4 other guns with the same specifications to the same order". The carbine features the second style receiver with screw-fastened dust cover rail and dust cover with oval finger grip. The carbine has a 20-inch round barrel with full length magazine, first style barrel band with integral front sight blade, two-leaf folding rear sight, staple-mounted saddle ring on the left side of the receiver, factory drilled and tapped upper tang and carbine style buttplate with sliding trap door. Internally, the tang is stamped "c185" on left side which matches assembly number to stock and buttplate. The carbine has a full nickel-plated finish and fancy grade walnut stock and forearm. The top of the barrel is roll-stamped: "WINCHESTER'S-REPEATING-ARMS. NEW HAVEN. CT./KING'S-IMPROVEMENT-PATENTED-MARCH 29. 1866. OCTOBER 16. 1860." in two lines between the lower barrel band and the rear sight. The upper receiver tang is roll-stamped: "MODEL 1873" in fancy letters. The serial number is stamped in script numerals on the lever latch and rear tang screw. The barrel and cartridge elevator are, correctly, not marked with a caliber designation. The carbine features factory scroll and punch-dot engraving on the top, sides and bottom of the receiver, side plates, upper and lower tang, cartridge elevator, dust cover and buttplate heel. The left side plate is engraved with a grazing deer in a round panel. The engraving was almost certainly executed by John or Herman Ulrich. The engraving style is very similar to nickel-plated Winchester Model 1873 rifle, serial number 41532, illustrated on page 174 of "The Winchester Book" by George Madis.

Fine. This carbine has been period re-plated and had the stock refinished but retains all of the original components. The nickel-plated finish is about 85% complete with some scattered flaking and discoloration. The barrel and receiver markings are all clear, and the engraving is sharp. The nicely figured, deluxe walnut stock and forearm have a high polish, piano style finish with a few minor handling marks and spots of discoloration. There is a 1/8-inch gap between the forearm and receiver that could be adjusted. This is a fine representative example of a rare, deluxe, nickel-plated and factory engraved Winchester Model 1873 Saddle Ring Carbine. 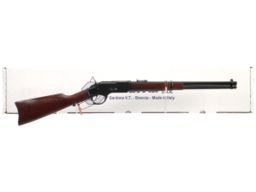 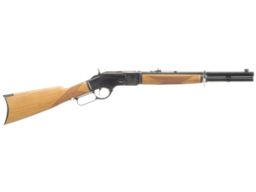 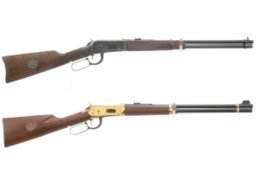 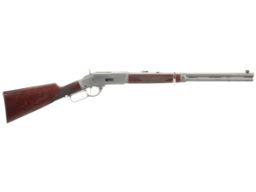 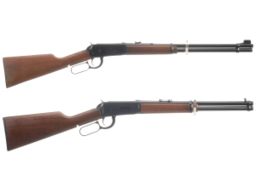 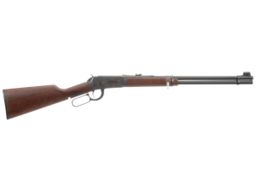