At the outbreak of the American Revolutionary War (1775–1783), the American colonies were ill prepared to produce standardized military weaponry and equipment on a massive scale. Committees (or Councils) of Safety were organized to solve this problem. Scottish immigrant James Hunter (1721-1784), who settled in the Falmouth area of Virginia in 1746, was the most successful iron maker to answer the colonies desperate call for war manufacturing. Once located in Stafford County, Virginia, along the Rappahannock River, Hunter’s Iron Works, which later became to be known as Rappahannock Forge, was in operation as early as 1759 until the early 1780s. By the time of the Revolutionary War, Rappahannock Forge was the largest iron works in the colonies. In 1776 Hunter proved to the Council of Virginia that his forge could successfully produce military grade muskets. The forge went on to manufacture an assortment of weaponry and implements for the Continental Army and Navy during the Revolutionary War. In his book “United States Martial Flintlocks” Robert Reilly concluded, “The arms turned out at the Rappahannock Forge are perhaps the rarest of all weapons ever produced anywhere under contract, and should be regarded in the highest historic significance.” Few weapons are known to exist, with examples kept by the Smithsonian Institution, West Point Museum and Rock Island Arsenal Museum. Offered here is an example of a brass barreled and silver mounted commercial flintlock pistol manufactured at the famed Rappahannock Forge. The brass barrel has double bands at the breech, a slightly belled muzzle and a floral engraving amongst “RAPA FORGE” in a banner. Parallel lines are used under the raised “A” of Rapa. The engraved lock plate is signed “J/HUNTER.” Note that firearms with the James Hunter marking have been identified as using the letter “I” as the first initial. During this period the letter “I” served as the letter “J.” The writer was unable to remove the lock in order to look for inspector initials and Roman numeral assembly numbers, which are typical markings found on Rappahannock Forge weaponry. The two ramrod thimbles, butt cap, side plate and trigger guard are sliver. There are no visible hallmarks. The trigger guard has an engraved floral blossom and an acorn finial. The butt cap is a high relief grotesque mask. The side plate is also engraved. The full length stock has a bird’s head style butt, beautifully pierced “CS” monogrammed silver thumb escutcheon and silver inlaid wire patterns partially outlining the stock flats and around the floral engraved barrel tang. A similar pistol is identified in a paper that noted firearms expert and author Nathan Swayze presented in 1975 titled “The Rappahannock Forge” (see figure 18). This pistol was by far the “fancier” example of a Rappahannock Forge firearm Swayze presented in his analysis, and the pistol was then owned by the Maryland Historical Society. Both pistols exhibit a grotesque butt cap, brass barrel slightly belled at the muzzle and two ramrod thimbles. Raised carvings are in lieu of the silver wire inlay and the barrel markings differ. Although the Swayze pistol had a replacement lock, evidence suggested that the original lock matched the design found on this pistol: elongated, pointed tail. The design of this pistol is also similar to an unidentified American holster pistol (circa 1760-1780) described and pictured in George Neumann’s “The History of Weapons of the American Revolution” (pages 202-203). Since this pistol is a private purchased weapon and most likely not a military issued sidearm, it has been argued that this pistol was manufactured before the Revolutionary War with the “CS” monogram linked to French and Indian War veteran Charles Smith. It is known that James Hunter settled in Virginia before the French and Indian War (1754-1763) in 1746 and record of his early days in the colonies has been lost to history. Early records of his famed iron works that began operating in 1759 are limited at best. Moreover, the lock plate marking is inconstant with known Rappahannock Forge weapons built during the Revolutionary War. The aforementioned fact supports the theory that it is plausible this pistol could have been manufactured around the time of the French and Indian War. The high quality of this pistol also suggests that the potential original owner is documented as being a prominent member of colonial society and of the status to have been able to own this. Charles Smith, whose initials match the monogram, is one such candidate. Charles Smith served in the Virginia Regiment during the French and Indian War. He entered service in 1754 as a private. He was with George Washington during the battle of Fort Necessity in 1754, and according to one account, lost his left hand during the battle (see History, “Charter and By-laws of the Society of Colonial Wars in the State of Illinois,” published in 1900, page 112). A more detailed account stated, “He lost his hand and a great part of his left arm by the bursting of a musket on his duty” (see “Virginia’s Colonial Soldiers” by Lloyd DeWitt Bockstruck, page 180). Undaunted by his injuries, Smith continued to play a role in England’s fight against the French in the New World. In late 1756, Washington put Smith in charge of constructing Fort Loudoun, one of Britain’s earliest fortifications on the western frontier. In the summer of 1757, Washington secured Smith a lieutenancy, and in June 1758, Washington appointed Smith commander of Fort Loudoun. While at the fort, Smith’s ties to the future general and American president grew. Smith forwarded Washington’s mail, kept an eye on Washington’s nearby Bullskin plantation and supervised the funds for Washington’s election to the House of Burgesses. Smith was also able to get himself into trouble. In September 1757, he punched postman rider Thomas Frazier during a dispute in a tavern. An half an hour later Frazier was dead. Smith was later exonerated. He died in 1776. Consignor research is included; we will let one decide the historical relevance, if any.

Very good. The barrel has an attractive mottled aged with crisp markings throughout patina. The action has a gray patina mixed with light surface oxidation. The silver is fine as it darkens with age. There is a hairline crack on the trigger guard. The stock is missing wood around the lock and on the crudely repaired forearm and a few hairline cracks are present. Mechanically fine. An extremely rare flintlock pistol that is missing from even the most advanced early American firearm collections, including some of the finest museums. A new discovery to the market, returned from Canada to the place of origin. A true survivor of the colonial period that is a truly extraordinary piece of American history! A true national treasure! 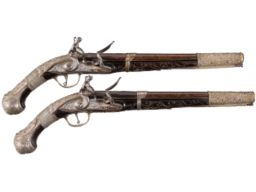 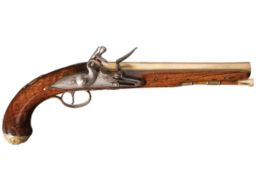 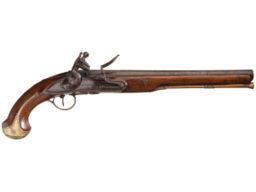 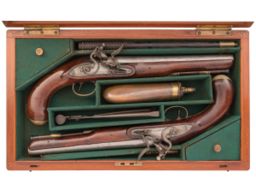 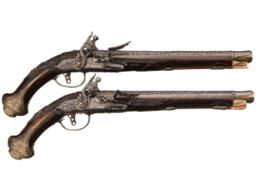 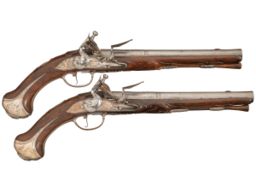