Established by Charles Parker shortly after the Civil War, Parker Brothers produced a wide variety of shotguns in different styles over the decades. Parker shotguns are perhaps the best known of all American shotguns and are among the most collectable. Offered here is a rare example of a Parker Bros. Grade 7 AAHE double barrel 20 gauge shotgun that was manufactured in 1919. Based on the information in "The Parker Gun: An Immortal American Classic" by Larry L. Baer, the AAHE grade was the second most expensive shotgun Parker had available at that time and sold for $500 in 1917; this equates to $9,515 in 2017 matched for inflation using the CPI Inflation Calculator! According to the book "The Parker Story," an estimated total of 238 AAH shotguns were manufactured (page 353). Out of this total, 17 are said to have been manufactured in 20 gauge with 28 inch barrels. This shotgun is listed by serial number in Price and Fjestad's "Parker Gun Identification & Serialization" as the highest (last) serial number known documented Grade 7 AA shotgun with Whitworth steel barrels (page 64). The shotgun is also listed in the book's serialization table on page 185,789 and confirms the grade, hammerless action, capped pistol grip stock, 20 gauge and 28 inch barrels. The barrels feature a concave matted solid rib marked "PARKER BROS. MAKERS MERIDEN. CT, U.S.A. WHITWORTH STEEL" with pointing arrows at each end and fitted with dual bead sights and ejectors. The receiver features a fantastic full coverage floral scroll and floral blossom engraving with "PARKER BROS" engraved on each side. This engraved motif extends to the break lever, trigger guard, forearm hardware, skeletonized buttplate and barrel breech. The serial number is engraved on the lower tang. The matching serial number is found on the lower tang, water table, barrel lug and forearm hardware. A number "8" found in the serial number on the forearm hardware and water table appears to have been factory restamped. Besides carrying the frame serial number (184008) on the lug, the barrels are stamped "43114" (left) and "43115" (right). Whitworth barrels carried their own serial numbers and should not be confused for the gun's serial number. The barrels are correctly numbered and have the letter "W" for Whitworth steel on the flats. The jeweled water table is marked with five-line patent date information on the right side and "AAH" over the serial number and "7" on the left side. The inside surfaces of the forearm hardware is also jeweled. The action is equipped with a manual tang safety and double triggers. Mounted on an extra fancy, select walnut splinter forearm and pistol grip stock which features high relief carved fleur-de-lis stock flats having a checkered recess in the center and fine checkering on the pistol grip and forearm. The hard rubber grip cap and a lightly engraved brass oval insert. The bare butt is checkered and fitted with a skeletonized buttplate. The leather bound takedown case has "R.W. FEWEL/Los Angeles, Calif." in gold on the exterior of the lid. At the time of this writing, Fewel has not been identified. However, the December 21, 1923, edition of the Santa Ana Register newspaper references a R.W. Fewel as a "son of a prominent local contractor" and a Richard W. Fewel has been identified has having lived in the Los Angeles area in the 1920s-1930s. The case contains an oiler, case key, two-piece bore rod, boxed Tomlinson gun cleaner head, boxed Gunslick lubricant and pair of snap caps.

Fine. The barrels retain 95% plus factory refinished blue finish showing some minor thinning and some minor handling marks. The remaining metal surfaces have a smooth gray patina with traces of original case colors in the protected areas and strong amounts of faded original blue finish around the triggers and on the inside of the trigger guard. The restored, possibly restocked wood is also fine showing extremely limited minor handling marks. The skelton buttplate is a replacement. The recut checkering is crisp. Mechanically excellent. The case is very good showing high spot and edge wear, some missing stitching and minor handling/storage marks. 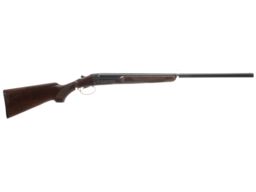 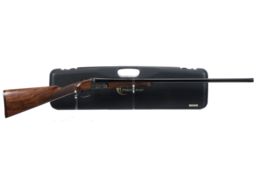 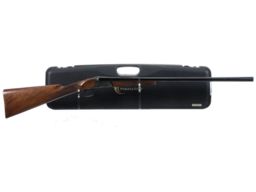 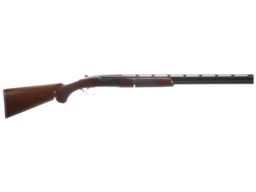 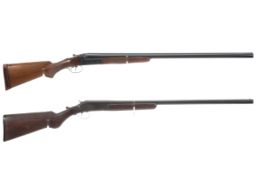