This is a very fine example of an original WWI German Maxim heavy machine gun manufactured in 1918 by the DWM factory. This is probably one of the most influential weapon designs of the 20th century as it was the first true self-sustaining machine gun that could fire in a fully-automatic mode without external means other than by power of the round and mechanism itself. This design was developed by Hiram Maxim in the 1883-1884 time frame with the final design finalized 1885. He demonstrated his design throughout Europe circa 1887 with the British Army, being the first country to recognize it importance and the first to officially adopted it and to use it in battle. Germany officially adopted the weapon in 1899 and used it throughout WWI and well into the Weimar period. This is a very late "1918" production model with serial number "45672". It has some matching visible serial numbers to include the top cover, back plate/butterfly trigger mechanism and spade grip assembly. The water jacket has been renumbered. The serial number on top of the bolt assembly has been removed. The top cover is marked: "46609/M.G.0.8./D.W.M./BERLIN/1918". The tangent style rear sight is graduated from calibrated from 400-2,000 meters with a simple inverted "V" front sight that is fitted to the front of the water jacket. The water jacket could hold seven (7) quarts of water that would allow the machine gunner to fire long bursts of intermittent, sustained fire. After approximately 500 rounds of fire the water would started to boil and would completely boil off/evaporate after 2,000 rounds. During WWI this weapon would wreak havoc and devastation in the large open field battles in France and Germany where it was nicknamed the "Devils Paintbrush" because of the thousands of soldiers it killed. This single weapon changed the tactics of land warfare forever. It does come with an original WWI tripod that is numbered 6592 on several of the parts.

Very fine with 85% of its arsenal refurbished blue finish overall with edge and high spot wear with clear distinct proof marks and serial numbers. The tripod is also in very fine condition with most of a dark green painted exterior finish overall. NOTE: This item is restricted as a National Firearms Act (NFA), fully transferable Class 3, which is registered with the Bureau of Alcohol, Tobacco, Firearms and Explosives, (BATFE) that is classified as a "Curios or Relic" as defined in 27 CFR, 478.11. These weapons are still subject to the provisions of 18 U.S.C. Chapter 44 and 27 CFR part 478. 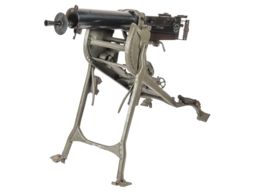 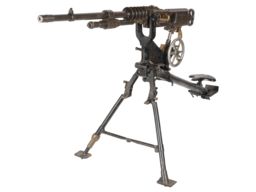 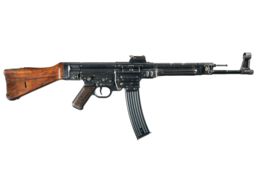 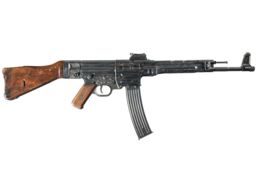 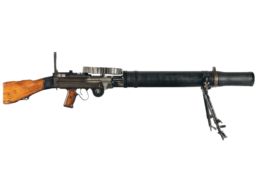 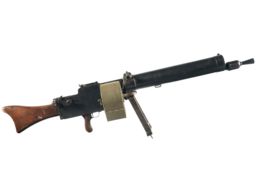