Very good with about half of the original black finish showing areas of brown patina, scattered scratches and mild spotting. The stock is fair with some cracks, dings and flecks of green paint. The tripod is in good order with some wear, spotting and paint loss. Mechanically very good. NOTE: This weapon is a restricted, National Firearms Act (NFA) Class 3, Fully Automatic Weapon, that is registered with the Bureau of Alcohol, Tobacco, Firearms and Explosives (BATFE) under the provisions of 18 U.S.C. Chapter 44 and 27 CFR part 478. This weapon is currently registered as being "LIMITED TO USE AS A SALES SAMPLE (Pre-86)" and as such can only be purchased by an FFL, with a Class 2 or Class 3 SOT License.

Developed in 1902, the Madsen is one of the earliest mass produced light machine guns. Over 36 nations invested in the gun, and the Madsen was deployed in the Russo-Japanese War, WWI, aftermath of the Russian Revolution, WWII, and elsewhere. While military use tapered off in the 1970s, the Madsen has been found on both sides of the drug conflict in Brazil as late as 2009, with gangsters reportedly stealing them from museums and old Argentine Army stockpiles and the Brazilian Military Police breaking out old stocks of Madsens from the Brazilian Army inventory. Blade front and 1900 yard tangent rear sights, an unknown marking milled off the left side of the frame ahead of the magazine well, 3-position selector switch to the rear, the plastic cocking knob on the right and an ejector port on the underside. Fitted with a folding bipod on the underside of the heat shield, a combination flash hider and recoil booster, and a smooth buttstock with a mounting socket in the underside. Included with the machine gun are six magazines and a folding steel tripod with on-board traverse and elevation mechanism. 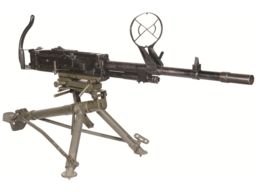 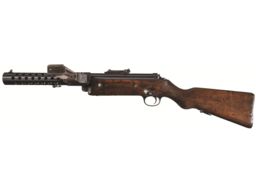 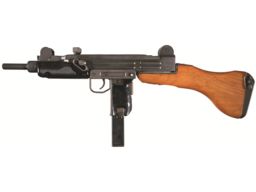 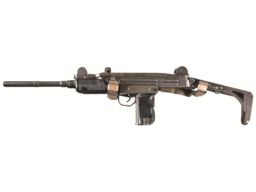 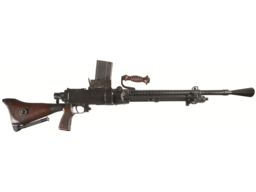 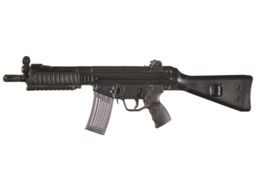