This is a rare example of one of the 500 Model 1911A1 pistols manufactured by the Singer Manufacturing Company during WWII under the Ordnance Educational Order No. W-ORD-396. Under that contract, the Singer Manufacturing Company produced a total of only 500 pistols. Consequently, they are considered very rare and highly prized by U.S. martial collectors today. It is theorized that almost all of these pistols were issued to the U.S. Army Air Corps, with a very low/limited numbered issued to the U.S. Army. The consignor states that his father, a member of the 1471st Engineer Maintenance Company during World War II, won this pistol in a poker game played in an abandoned bunker along the bank of the Rhine River and the gun has stayed in his family until being sold at this time. The father’s unit arrived in France aboard the USS Henry Gibbon on January 16, 1945, and while making their way to the front by train, the 1471st was involved in a horrific train accident at the coastal city of Saint-Valery-En-Caux. This lot includes a photocopy of the history of the train crash that was authored by a member of the 1471st and shows photos of the troop ship that took the 1471st to France and the train crash. The left side of the slide is marked in two-lines ahead of the slide serrations as follows: "S. MFG.CO./ELIZABETH, N.J., U.S.A." There are no markings to the right side of the slide. The top of the slide and the lower left side of the frame are both correctly stamped with a single "P" proofmark. The rear of the slide is also correctly not serial numbered, as that manufacturing step was only utilized on Colt produced 1911A1 pistols. The right side of the frame is stamped "UNITED STATES PROPERTY/No S800297" in two lines, with "M 1911 A1 U.S. ARMY" forward of the slide stop pin hole. (This area was quite possibly heavily struck by the roll die as it is indented.) The left side of the frame is stamped with the initials "JKC" for Col. John K. Clement, the Executive Officer of the New York Ordnance District. The pistol has the wide spur hammer with borderless checkering, and the checkered thumb safety, slide stop, trigger and mainspring housing. It is fitted with a wartime manufacture (1943-1945) Springfield Armory manufactured barrel. This barrel is marked on the left side of the lug with separated "S P" proofs and with the heat lot "PX-1" marking on the lower left side of the chamber. These wartime barrels were sometimes provided by the Ordnance Dept. to various companies to help them maintain their monthly production numbers when barrel were unavailable. It is fitted with a set of wartime clear plastic/resin grip panels. Underneath the panels on each side, the frame is covered with an aluminum foil type material with two larger "Five Pointed Stars" overlaid on top of the aluminum material. This style of grip was called a "sweetheart" grip as they were typically seen on GI pistol that displayed a picture of their wife or girlfriend. This example may have actually belong to some General during the war who intended to accurately denote his rank. It is fitted with an all blued WWII magazine manufactured by the M.S. Little Company that is marked with an "L" on the front edge of the lip. For a true .45 Auto collector, the Singer Manufactured M1911A1 pistol is the Holy Grail of all U.S. Model 1911A1 WWII pistols. It is complete with a WWI US marked leather holster. The back is stamped "WARREN LEATHER/GOODS CO./1918/J.A.D."

Fine with 40% of the original blue finish remaining overall showing general wear and blue loss. Clear and distinct markings and proofs. The unique grips are very fine condition with nice clear plexiglass showing the two larger "Stars" underneath. While not Singer grips, they are very unique and certainly "one-of-a-kind" and appear to be period installed on the pistol and certainly WWII. Mechanically excellent. Don't miss the chance for a genuine WWII-issued Singer M1911A1 semi-automatic pistol. 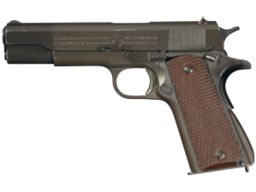 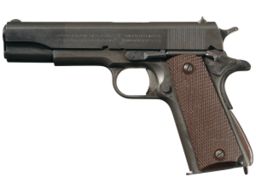 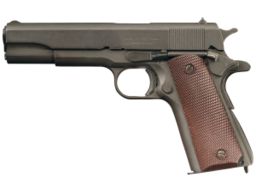 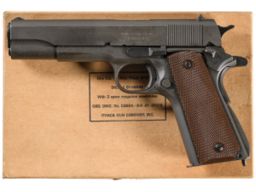 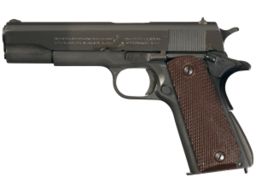 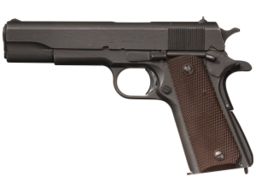