Offered here is a Civil War Era Henry Lever Action Rifle that was manufactured by the New Haven Arms Co. in 1864. The rifle has the distinctive brass receiver with the letter "M" engraved on the right side, German silver blade front sight and folding ladder rear sight graduated to 900 yards. The top barrel flat is stamped with the two-line patent date/address marking ahead of the rear handmade non-factory replacement sight and the serial number "4704" at the breech. This serial number also is stamped on the left side of the lower tang, stock inlet, both buttplate screws and buttplate. The buttplate has a hinged brass trapdoor (cleaning rod not included). The left side of the stock and barrel have a factory sling swivel and screw mounted loop for a sling hook. Experts believe that most Henry rifles made before 1865 were privately purchased by individual federal soldiers who wanted the unprecedented firepower offered by the 15-shot Henry repeating rifle. The Henry rifle was especially popular with soldiers in Illinois, Indiana and Kentucky regiments. Many of these soldiers purchased Henry rifles from dealers in Louisville, Kentucky, and other Midwest cities in 1864 using re-enlistment bounties.

Good. The barrel and magazine are very good with crisp original markings and a mottled gray patina overall. The fine frame has a highly attractive aged mustard yellow appearance. The heavily worn solid stock is varnished with a number of minor-moderate dings and scratches. Mechanically fine overall. An attractive representative example of a Henry rifle! 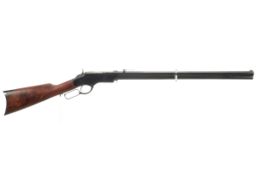 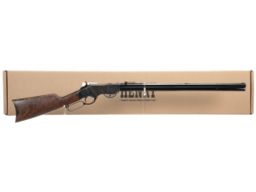 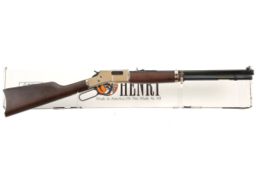 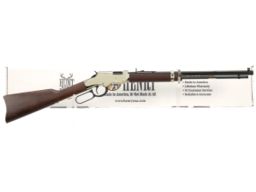 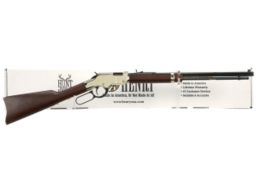 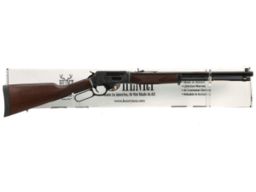