Only 2,000 Greene carbines were manufactured by the Mass. Arms Co. in the mid-1850s under contract with the British Government for use in the Crimean War. They differ from the American type in the larger caliber, the use of Queen Victoria's "St. Edward's Crown/VxR" cypher behind hammer on the lock, the British proofmarks, shorter barrel, hexadecagon section ahead of the rear sight, sling ring on the trigger guard tang, and the use of casehardened steel for the butt and patch box instead of brass. All but a couple hundred are believed to have been scrapped for parts. This example has the standard blade and folding ladder sights, "MASS ARM. CO./CHICOPEE FALLS/U.S.A. 1856" behind the cypher on the lock, Maynard patent marking on the primer door, British proofs, the two-line Greene patent marking on the upper tang, and matching serial numbers other than the hex section which is one number earlier, possibly a factory assembly error. 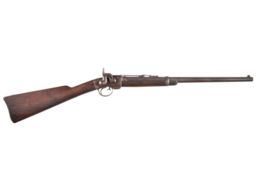 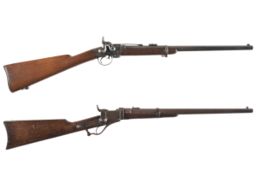 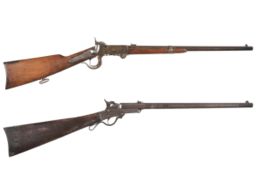 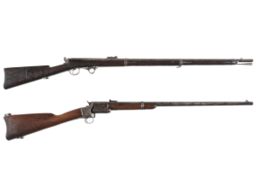 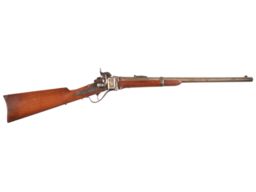 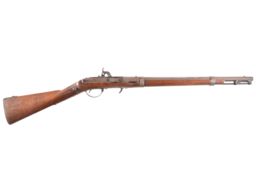