Manufactured at an unknown date, this knife pistol shows a number of similarities to the Cromwell knife pistol and the Unwin & Rodgers. In particular, it features a single shot pistol attached to the body of a folding pocketknife, with the bore running parallel to the blade and a folding trigger that is shaped like a corkscrew. The resemblance ends quickly. First, this example shows a finer overall level of fit and finish, with sculpted details in both the metal fittings and the overall body of the pistol. Second, and most importantly, is the action; unlike the tip-up breech of the Cromwell or the in-line percussion action of the Unwin & Rodgers, the action of this pistol is essentially a miniaturized Chassepot bolt-action needle fire, right down to the tiny gasket behind the bolt head, with the bolt handle turned to rest against the side of the body when closed and sculpted to match the overall finish of the metal. Operation is virtually identical to the Chassepot, with the manually-operated cocking piece doubling as one of the locking mechanisms for the breech and a "half cock" notch just a few degrees off from top center. The notch is of interest, as many knife pistols lack the safety mechanisms to be safely carried while loaded, instead intended to be kept with an empty chamber until the moment of truth; this example could conceivably have been carried loaded, and brought into firing condition in a matter of seconds. No maker's marks or proofs are visible on the pistol components, with the only significant identification being on the single knife blade. Measuring 4 1/4 inches long with a dagger point profile, single live edge and single fullers running straight to the tip, the blade is fitted with a very robust spine lock and etched on one side "Fy BERTHOD/39 & 41 PASSAGE-JOUFFROY/PARIS". Berthod has not been positively identified, but a "Tenie & Berthod" is noted as one of the manufacturers of the 1867 "Tabatiere" rifle, a contemporary of the Chassepot. The Passage Jouffroy was one of Paris' covered passages, pedestrian-only covered walkways that doubled as high-class shopping centers, making them the predecessor of the modern shopping mall. Established in 1845, the Passage Jouffroy holds the distinction of being the first of Paris' covered passage to use full glass and metal construction as well as in-floor heating, and remains active today, with #39 occupied by a children's bookshop and #41 by a toy store. The main body of the knife is constructed from German silver and steel, with a pair of rectangular mother of pearl panels covering the sides and the grip section paneled in brown and translucent horn, sculpted similarly to the bolt and fitted with a small storage compartment with a hinged German silver door. While not documented, the combination of the rich features, high-class venue of origin, and the action suitable for loaded carry suggest a weapon marketed to the well-to-do of Paris as both a sturdy utility knife, a rapidly deployed defensive pistol, and the sort of accessory one wouldn't mind being seen with by their peers.

Very fine. The steel shows a fine bright tone overall, with areas of gray patina and mild spotting. A few light scratches are visible around the hinge screw of the blade, with some rubbing on the ricasso from the tightness of the mechanism. A few shallow scratches are present on the grip panels, and the compartment door moves freely. The pistol is in good working order. A visually and mechanically novel firearm, which could benefit greatly from more research. 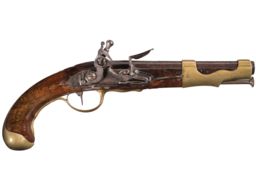 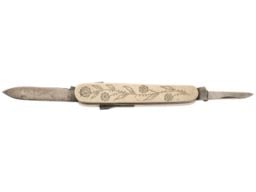 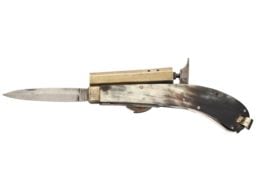 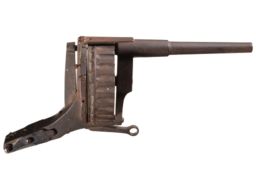 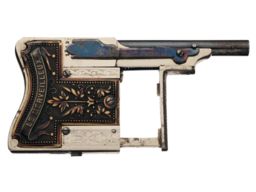 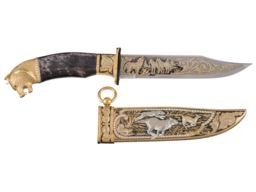