These attractive knife pistols were designed by Joseph-Celestin Dumonthier who patented "couteaux de chasse pistolets" (knives with hunting pistols) in 1840. His surname usually appears spelled both as Dumonthier in period sources and modern texts, but many of these knife pistols have "Domouthier." He was patenting inventions as early as at least 1839. He was originally from Houdan in northern France, but he later moved to Paris. Hunting swords and knives with built in pistols had been in use for a few centuries in Europe by that time. They were primarily used to dispatch downed animals such as wounded boars during hunts. Similar knife pistols with much plainer finish were also manufactured in Scandinavia for defensive use by postal workers in the same period. Emperor Maximilian I of Mexico owned one of these attractive knife pistols (currently part of the collections of the Art Institute of Chicago), and a gilded example like this would certainly have been suitable as a presentation piece or gift to a wealthy man. It has scrollwork patterns etched along the 8 1/8 inch dagger blade, both barrels, the spines, and even the back of the trigger. All of these surfaces are also finished with gold plating. The blade is marked "DUMOUTHIER" above the left barrel and has "BREVET DVN" below the barrel. The scales are spiral cut. The upper section of the quillions pull back revealing the nipples and serve as the hammers. When the right hammer is pulled back, the folding trigger extends. Pulling the trigger first engages the right hammer, and then, once the trigger is reset, it can be pulled a second time to engage the left hammer. Provenance: Gillespie collection.

Exceptionally fine with 85% plus original gold finish, gray patina in the faded areas mostly concentrated on the barrels and right hammer, and distinct etching and markings. The grips are very fine and have two cracks on the left panel above the screws, some minor handling wear, and attractive natural tones. It is mechanically excellent and retains a fairly sharp blade. These knife pistols are very rare and are extremely hard to find in high condition like this one. 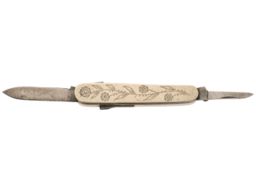 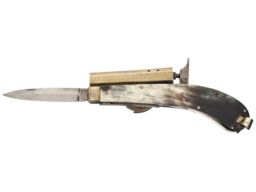 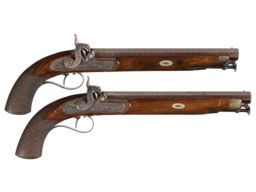 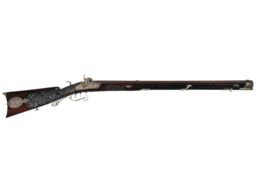 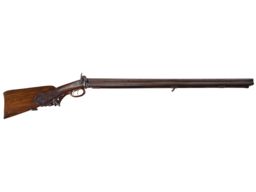 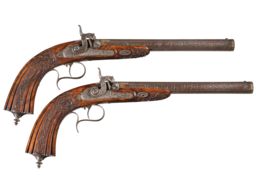