RIAC is extremely proud to offer one of the crown jewels of Smith & Wesson collecting: The Alvin White signed, embellished Model 19 revolver presented to FBI director J. Edgar Hoover by renowned firearms collector William Sweet. This revolver, serial number K 333333, has been well-documented over the years and has been photographed and noted in several publications such as Timothy Mullin's "The K-Frame Revolver Volume II," Jim Supica and Richard Nahas' "Standard Catalog of Smith & Wesson" and Roy Jinks and Sandra Krein's "Smith & Wesson, Images in America". J. Edgar Hoover led the FBI for nearly a half-century, from 1924 until his death in 1972, and is responsible for almost single-handedly shaping America's criminal justice system in the 20th century. He emphasized modern investigational techniques, built the FBI into a large crime fighting federal agency and gained tremendous fame for his unwavering stance against organized crime. As verified in the accompanying factory letter, this 4 inch barreled revolver with rosewood grips was factory prepared in the white (“polished not blue”), shipped from the factory on May 19, 1958, and delivered to William O. Sweet of Sweet Manufacturing Co., Attleboro, MA, who in turn presented it to Director Hoover on July 26, 1958. The cost was expensed to the S&W Advertising Account at no charge, a common practice of the factory where important persons were concerned. The Advertising Account invoice (copy) and picture (photocopy) of Sweet presenting the revolver to Hoover are also included. William Sweet was the heir to Sweet Manufacturing Co., a jewelry chain manufacturing company established in 1904 by his ancestors. Well known within the firearms collector fraternity, Sweet owned an extensive western firearms collection, which included about 45 Native American related guns and rivaled even the best museums, and housed it at his jewelry factory. He had close personal ties to the head of the FBI’s New York division, Harvey Foster, as well as to Hoover himself and upper echelon S&W representatives, including then president Carl Hellstrom. On several occasions Foster worked with Sweet to acquire special S&W factory built presentation guns. Sweet was also friends with renowned firearms engraver Alvin A. White, who lived and worked in Sweet's home town of Attleboro, Massachusetts. It was White who embellished this magnificent presentation revolver for Sweet to present to J. Edgar Hoover. Also in this auction are two Alvin White embellished Model 19s that are linked to Foster and Sweet. Revolver K331446 is a perfect companion to this Hoover presentation Model 19, as both revolvers have similar embellishment. An important additional accompanying document comes in the form of a handwritten letter by John Mohr (photocopy). Assistant to the Director John P. Mohr (1910-1997) was a member of Hoover's inner circle. During the waning years of Hoover's unprecedented tenure as FBI Director, Mohr was one of a handful of people Hoover trusted at the bureau. Mohr was given the responsibility to notify Acting Attorney General Richard Kleindienst of the director's death, to seal Hoover's office and supervise the funeral arrangements. His FBI career started in 1939 and he reached the highest rank possible, that of No. 3 in the FBI hierarchy, several years prior to being forced to retire, by then Acting FBI Director L. Patrick Gray, on June 30, 1972, during the internal upheaval brought on by Hoover's death. In his November 27, 1985 dated letter, Mohr confirms that this revolver, listed in great detail and by serial number, was presented to Hoover by Sweet, explaining that Sweet “was an admirer of Mr. Hoover.” Mohr also states he “observed” this revolver in Hoover’s home and that it was given to him at the time of the famed G-man’s death by Hoover’s closest confidant and the executor of his estate, long-time Associate Director Clyde Tolson. According to Mohr, Tolson did not wish to have firearms in the house, and therefore he gave the gun directly to Mohr. The revolver features near full coverage engraved floral scrollwork on stippled background accented with gold inlaid scrolls. The trigger guard has a facsimile of Hoover’s signature in flush gold. The left side of the frame has the FBI seal in relief gold. The right side of the frame has a bust of Hoover in relief gold above three jewels set in gold followed by “1917/1924” in flush gold at the front. The 1917-1924 date range corresponds to Hoover’s years of government service before being named director of the FBI. The back strap has the number “1” in flush gold and the FBI motto “Fidelity,” “Bravery” and “Integrity” in flush gold and inside engraved banners surrounded by 20 raised gold leaves and 21 small gold dots. The butt serial number “K333333” is inlaid in gold. Alvin White’s gold cartouche is on the right side of the grip frame. Matching serial numbers are on the butt, cylinder and ejector shroud. Fitted with highly figured and checkered S&W medallion rosewood grips. The case, which is also documented in Mohr's letter, has a small inscribed plaque on the inside that reads, "TO/J. EDGAR HOOVER/DIRECTOR-F.B.I./FROM/BILL SWEET/JULY 26, 1958." Provenance: FBI Director J. Edgar Hoover, Assistant Director John P. Mohr, Richard Mohr, Mohr Family and Chad Gripp collections.

Near new as embellished by Master Engraver Alvin White and presented to FBI Director J. Edgar Hoover. The revolver shows only a faint cylinder line. Mechanically excellent. The case is excellent showing some scattered minor handling/storage marks on the exterior. This historic, well-documented J. Edgar Hoover presentation Model 19 revolver is an unquestionable crown jewel in Smith & Wesson collecting. A historically significant, museum quality revolver that will be the centerpiece to any S&W or FBI collection. It does not get any better than this! 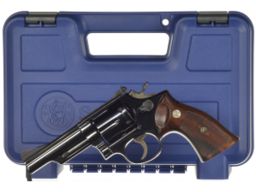 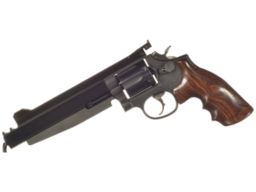 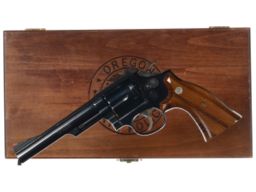 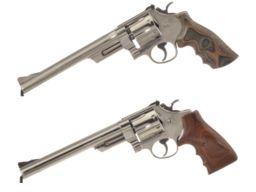 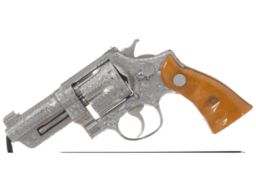 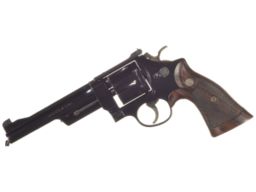