Developed relatively late in the WWI, the 1903 variant noted in official records as "Stripped for Air Service" is one of the rarest variant models of the U.S. 1903 rifle. The most prominent differences are in the stock and magazine, the former being notably shorter, terminating immediately after the mid barrel band and produced without provision for a sling, the latter swapped out for a fixed 25-round extended magazine. The rear sight has been cut down, changing it from a folding ladder sight to a windage adjustable fixed 100-yard notch sight, and the barrel band is solid, one-piece construction secured with a screw. Multiple theories have been advanced regarding the purpose of these rifles, but the one that most fits the facts is that they were intended to be carried on airplanes as emergency weapons in case the craft was downed; the lack of sling was consistent with an arm not intended to be carried on the shoulder for long distances, the large pre-loaded magazine eliminates the need for the crew to wear cartridge belts, and the overall weight reduction would keep the rifle from being an undue burden on the aircraft. Reports indicate that only 910 of the Air Service 1903 were manufactured and shipped to France, with indicators that a number of them saw evaluation as a possible infantry weapon. Shipped back to the States after the war, the Air Service 1903 was earmarked for removal from inventory; several were converted back into standard 1903 rifles, the rest slated for destruction, though rumor has some slipping the noose and winding up on Navy dirigibles during the inter-war years. This particular rifle was featured in multiple works by noted writer and editor Bruce Canfield, including an October 2004 American Rifleman Article "Stripped for Air Service" (photocopy included), "Illustrated Guide to the '03 Springfield Service Rifle" (photographs on pages 90-92), and "U.S. Military Bolt Action Rifles" (pictured on page 221), as well as having been fired on-air by the author on American Rifleman Television. Manufactured in 1918 and fitted with a Springfield "SA/(bomb)/5-18" barrel, this Air Service 1903 has all the above-mentioned distinctive features, with the stock marked "W" in the magazine switch cutout and "P" behind the trigger guard, and fitted with a later production replacement Model 1903 Remington smooth flat trapdoor buttplate. Other parts such as the cartridge follower are 03-A3 replacement. Of additional note about the stock is the wood used, which shows a much finer appearance than a typical military stock of the era, with the left side of the buttstock in particular showing very elaborate grain. Provenance: Bruce Canfield collection.

Very good as restored to "Air Service" specification using a mixture of both original and later production replacement parts to replicate an "Air Service" Model 1903 Rifle. The barrel and receiver show areas of mixed gray patina, with some spotting, particularly on the trigger guard. The stock is good overall, with some scattered dings, as well as some openings in the grain on the right side of the wrist and left side of the buttstock. Mechanically excellent. 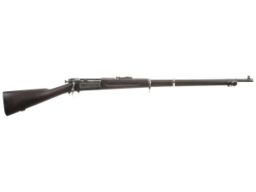 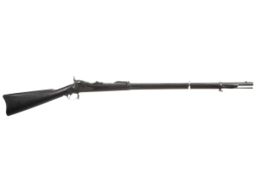 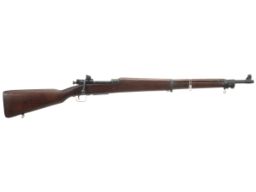 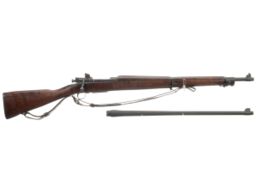 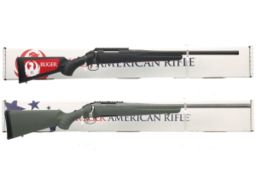