Manufactured circa 1585-1600. Wheel locks were invented at the beginning of the 16th century. However, due to their complex mechanisms and the associated cost of manufacturing them, wheel lock pistols were primarily limited to use by specialized military units (including the guards of the prince-electors in the Holy Roman Empire) and noblemen. The two stage barrel has "H" on the upper left and upper right flats (similar to "Der Neue Stockel" page 2,892), a Nuremburg forward on the upper flat, banded transition from octagon to round, and a cannon style muzzle. The flat lock has a second Nuremburg mark. It features an enclosed wheel, external safety, "green man" face on the pan cover, and a bestial design on the ringed cock. It has a turned baluster trigger and trigger guard. The fruitwood stock has a dark ebonized style finish with high gloss and extensive white staghorn inlays with scrimshawed geometrical designs and classical scenes including "green man" faces. The large ball-pommel is decorated en suite with a large mask cap. The wooden ramrod has a white staghorn tip decorated en suite. Note that similar designs to those at the breech on either side of the back strap appear on the pair of wheel lock pistols dated "1588" on pages 124-125 in "Decorated Firearms, 1540-1870 From the Collection of Clay P. Bedford" by Gusler and Lavin that were formerly in the Dresden Armory collection. The designs in that location, the flash pan, and elsewhere are also similar to the Nuremburg guild marked pistol from our December 2016 auction dated to the late 16th century. The similarity among these pistols is believed to signify that they were all meant for a particular elite unit. An iron powder flask with built in spanner and screwdriver is included.

Fine overall with mostly bright cleaned iron surfaces, some wear on the markings, some light patina forming, light scattered pitting throughout, some light oxidation, and minor marks. There is evidence of acid cleaning on the lock. The stock has a spliced forend, dark applied finish, a small crack on the left at the junction with the ball, slight cracking and scrapes around some of the other design elements, some staghorn panels replaces, and attractive designs throughout. It appears to be mechanically fine, but it has not been tested. The combination tool is more recent and has mottled gray patina and light pitting and is very good overall. 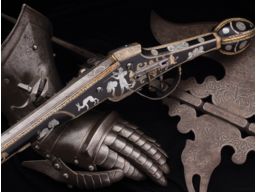 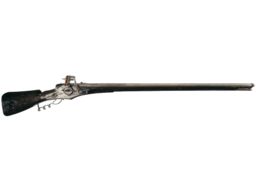 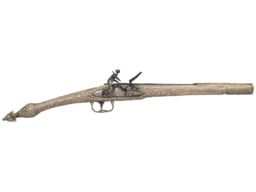 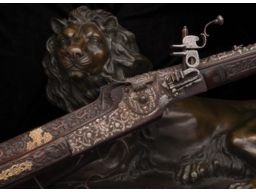 Lot #291: Wheellock Sporting Rifle by the Master of the Animal-Head Scroll 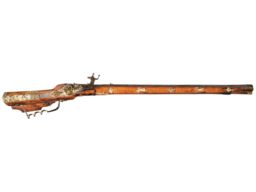 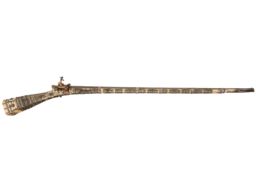