This is a beautiful example of a Colt manufactured Thompson Model 1921/1928 US Navy over stamp submachine gun complete with a matching lower trigger housing. Originally developed by the Auto-Ordnance Corporation in NY, they licensed the Colt firearms company to manufacture approximately 15,000 SMGs for both commercial and military use. This specific submachine gun was originally produced as a M1921 and was later converted into a M1928 and correctly over-stamped with "U.S. NAVY MODEL OF 1928". It was originally sold to the Schenectady, NY Police Dept, then sold/transferred to the Athens Georgia Law Enforcement Co. (circa 1976), then in 2000 sold to a class III dealer. This is documented on page 891 of the book "Colt Thompson Submachine Gun" by Gordon Herigstad. The M1921/28 was developed in the late 1920s following the recommendation by the USMC for a reduction in the rate of fire following their successful campaign/use in Nicaragua. The Auto Ordnance company accepted that and began to remark their inventory with the intent of peaking sales interest to various police and government agencies. The 1921 vs 1928 configurations difference is basically the later model is equipped with a slightly reduced cyclic rate of fire that allowed the weapon to be more manageable and actually more accurate. The parts consist of the Auto Ordnance/CUTTS marked compensator on the end of the barrel, the short 10 1/2 inch barrel with cooling fins, the vertical pistol grip, the detachable buttstock, and the fully adjustable Thompson ladder rear sight that is graduated from 100-600 yards. The left side of the receiver is marked "U.S. Navy/MODEL OF 1921, with the "1" overstamped with an "8" over the serial number. Farther back on the left side of the receiver it is marked "THOMPSON SUBMACHINE GUN/CALIBER .45 AUTOMATIC COLT CARTRIDGE/MANUFACTURED BY COLT'S PATENT FIRE ARMS MFG. CO./HARTFORD, CONN. U.S.A.". The right side is marked with the five lines of dates along with the two line "AUTO-ORDNANCE CORPORATION, NEW YORK U.S.A". The top of the receiver is marked with the Thompson Indian "Arrow Head" logo. This Thompson is complete with one 50 round Auto-Ordnance marked drum magazine, four original 20 round Thompson stick magazines. The weapon and accessories are all stored in a modern reproduction FBI style carrying case.

Very fine with 90% plus of the original blue finish overall with wear and blue loss on the edges and high spots and thinning blue on the right side of the receiver, and compensator. The wood components are all in very fine condition with a nice matching color overall mixed with some light handling marks and scratches and some slightly heavier handling marks on the rear underside of the stock. Various magazines are all in very fine plus condition, and the reproduction case is in excellent condition. NOTE: This item is restricted as a National Firearms Act (NFA), fully transferable Class 3, which is registered with the Bureau of Alcohol, Tobacco, Firearms and Explosives, (BATFE) that is classified as a "Curios or Relic" as defined in 27 CFR, 478.11. These weapons are still subject to the provisions of 18 U.S.C. Chapter 44 and 27 CFR part 478. 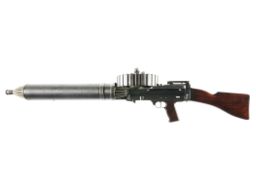 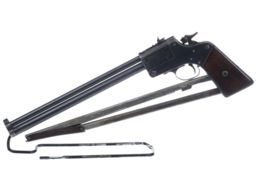 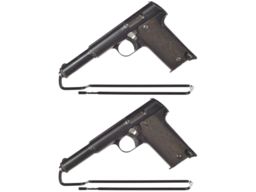 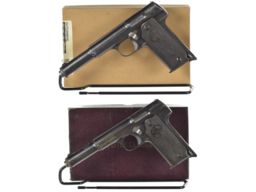 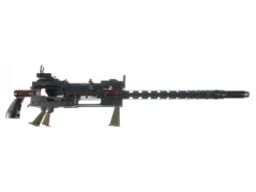 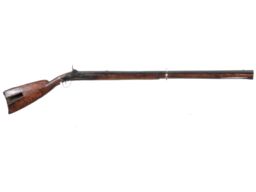