This is an excellent example of an original very early Colt/Armalite manufactured, fully automatic commercial M16 rifle. These early original Colt/Armalite fully automatic rifles are very rarely found on the open market today as very few were actually sold in the early production days, especially with the dual company markings, and most were later altered or upgraded. These were called the "Model 01" and were in their own serial number range that identified it as an Armalite Rifle but manufactured by the Colt Firearms Company. This early example is serial number "606" and it was probably manufactured circa late 1963 or early 1964. It has all the very early unaltered features such as the very early, almost preproduction three prong flash hider, (not the Vietnam version), the non-chrome lined steel barrel that is unmarked, not even with the twist rate, the early all machined front sight base/gas system, all chromed bolt and bolt carrier assembly with the large headed cross-pin (that holds in the firing pin) and the very early really small charging handle with the short latch and wings on the sides. It also has the early machined selector switch with the small hole on each sides. It also includes the early two-piece buffer assembly, early non-trap plastic buttplate and handguards. The side of the magazine well is roll-marked with the large Colt "Rampant COLT/COLT" over, "ARMALITE AR15/PATENTS PENDING/CAL. .223/MODEL 01/SERIAL 000606". Farther back it is marked: "COLTS PATENT FIREARMS MFG. CO./HARTFORD CONN./U.S.A.". It is correctly marked with "SAFE/SEMI/AUTO". As noted it has the early shiny all black plastic components. It is complete with one Colt marked AR-15 magazine and a green web sling.

Excellent with 98% plus of its original finish overall with edge and high spot wear and evidence of light firing. The plastic components are all in excellent condition showing some scratches and light handling marks overall. Mechanically excellent. NOTE: This item is restricted as a National Firearms Act (NFA), fully transferable Class 3, which is registered with the Bureau of Alcohol, Tobacco, Firearms and Explosives, (BATFE) that is classified as a "Curios or Relic" as defined in 27 CFR, 478.11. These weapons are still subject to the provisions of 18 U.S.C. Chapter 44 and 27 CFR part 478. 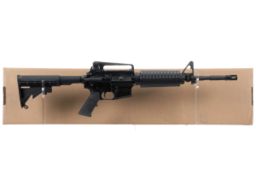 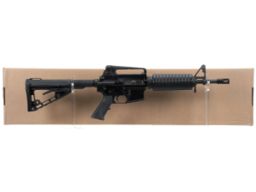 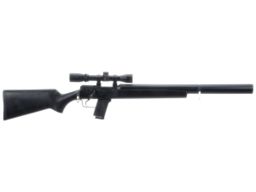 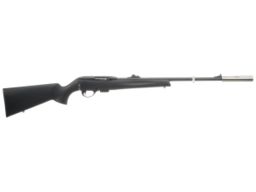 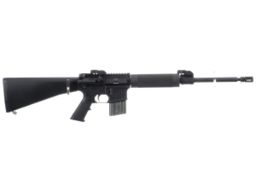 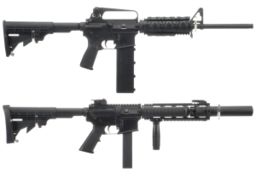