Offered here is an engraved Marlin Model 336A rifle presented by American author and African big game hunter Robert Ruark to Australian diplomat Richard W.L. Austin. Robert Ruark (1915-1965) may no longer be a household name, but in the years after World War II, he was one of the most prolific and most popular American writers. Writing both fiction and non-fiction, Ruark gained noted success, and today many critics consider his writings to be some of the best "lost works" of the American post-war period. His monthly "Old Man and the Boy" stories featured in "Field and Stream" were complied into two best selling books: "The Old Man and the Boy" and "The Man's Boy Grows Older." A six week safari in Tanganyika (now Tanzania) fulfilled a boyhood dream and resulted in the book "Horn of the Hunter," a retelling of his African adventure. This was the first of many trips to Africa Ruark took from 1951 until his death in 1965. While in Africa in 1952, Ruark found himself in the middle of the Mau-Mau Uprising, a rebellion orchestrated by local ethic groups fought against the white European settlers and the British Army in Kenya. He wrote some of the best articles about the crisis. The rebellion was also the inspiration behind Ruark's novel "Something of Value," which was turned into a 1957 MGM movie of the same name staring Rock Hudson, Dana Wynter, and Sidney Poitier. He released through RKO a one hour documentary entitled "Africa Adventure" that featured Ruark alongside noted professional hunters Harry Selby and John Sutton hunting Africa's most dangerous game. As to the story behind this gun, we turn to Ruark's personal secretary, Alan Ritchie. On page 205 of his book "Ruark Remembered," Ritchie claimed that Ruark "was always giving [guns] away or lending them to white hunters or friends" and references "a Marlin .30-30 left in Japan" no later than 1962. Richard W.L. Austin (1919-2000), the recipient of this gun, has been identified as a career Australian diplomat fluent in several Asian languages, the author of "The Narrow Road to a Far Country: Intimations of Things Japanese," a traditional Japanese and Australian art collector and Chair of the Board of Trustees of Queensland Art Gallery from 1987 to 1995. Although the relationship between Ruark and Austin remains unknown at the time of this writing, Austin's strong connections with Asian culture makes it highly plausible that this is the Marlin Ritchie references as being "left in Japan." The rifle was manufactured in 1952. The presentation inscription is on the left side of the receiver: "To: R.W.L.A." over the large signature "Robert Ruark." An extensive floral scroll motif on a stippled background is engraved on the receiver, rear barrel section and lever. The nicely figure forearm and pistol grip stock feature multi-point checkering, sling swivels and serrated plastic buttplate. Consignor research and the book "Ruark Remembered" by Alan Ritchie are included.

Very fine as professionally custom embellished by an unknown master engraver. The rifle retains 95% plus of the blue finish showing a few areas of dark raised surface corrosion. The wood is excellent showing some minor pressure dents and scratches (mostly on the forearm) and crisp checkering overall. Mechanically excellent. 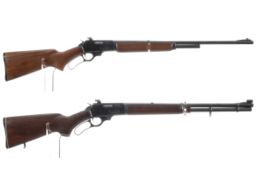 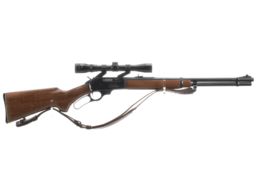 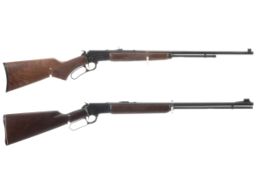 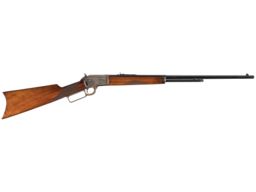 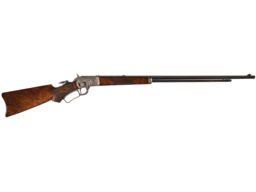 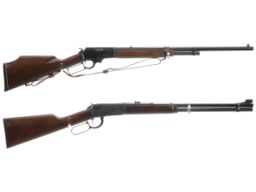