This is an example of a extremely rare 1st Year U.S. Navy contract Model Colt 1911 pistol that was manufactured in 1912. These Navy marked Colt M1911s were only manufactured through the end of 1914 and into early 1915. All other Navy contracts pistols shipped after that time were fitted with the standard "U.S. Army" marked slides. This rare pistol was shipped as part of a 500 gun shipment to the U.S. Navy Yard in Brooklyn, NY, on March 1912. It has the correct early variation small diminutive serial number "No. 796" stamped on the right front end of the frame extension. The later replacement slide is stamped on the left side with the early Colt factory two line, two block address/patent marks with the Rampant Colt logo (uncircled) behind the serrations and on the right side with the noted "MODEL OF 1911. U.S. NAVY" (with serifs) markings. It has the correct early, narrow front sight blade, with the rounded top, rear sights. The frame is stamped with the intertwined initial "WGP" for Walter G. Penfield, U.S. Ordnance Inspector, along with "UNITED STATES PROPERTY" on the left side. It has a later production Colt barrel that is marked on the lower left side with "COLT 45 AUTO", with a small capital "F" stamped in front of the barrel lug with no "H" provisional stamp on the front of the barrel hood. It is fitted with the later replacement second pattern early wide spur hammer with short border-less checkering, the type 1 magazine catch, a replacement 1918 pattern thumb safety with the thick thumbpiece with smooth underside transition with no undercut, the replacement long trigger with the smooth face, replacement short grip safety, and flat mainspring housing with the lanyard loop. It has the standard checkered grips with diamond patterns around the screws. It is fitted with a later production half-blued, pinned magazine with the smooth magazine base.

Fine as field upgraded with 50% of the original blue finish still remaining overall with the balance of the metal having a thinning brown patina type finish. The front grip strap does show some plumb colored oxidation with the mainspring housing showing more thinning of the blue finish. The later production replacement slide has very nice original and distinct factory markings to include the "U.S. NAVY" markings with the blue finish thinning overall with the top of the slide showing light oxidation/minor erosion, (probably from sitting in a holster). The heavily worn grips are original and show clear and distinct checkering around the edges with the center section of both grip panels showing heavier pressure dents, obviously from actual duty use. There are only a few later parts that could be replaced to restore this back to its original issue condition, or you can display it as-is as these changes were probably actually field upgrades. This is a highly desirable example of an extremely early production Colt first contract U.S. Navy issue Model 1911 service pistol. 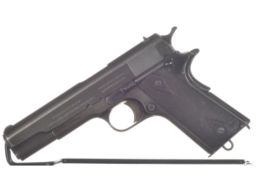 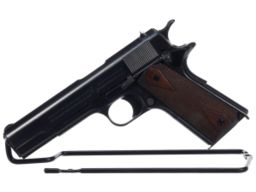 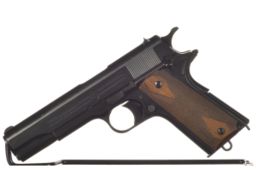 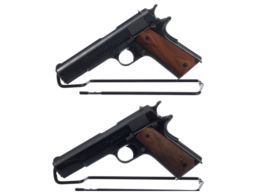 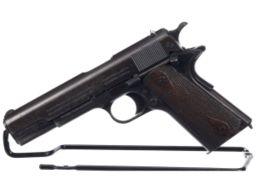 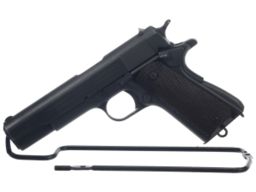