Manufactured in small batches in the late 1960s, the "M1969" was another attempt by Colt to convince the U.S. Government of the virtues of the Colt Commander as an officer sidearm; the genesis of the Commander itself was a late-40s trial which Colt answered with a shortened Government Model, which Colt then took to the commercial market with noteworthy success. In a somewhat ironic turn, Colt's offering, a shortened and lightened Colt Government Model was passed by in favor of the Rock Island Arsenal M15 pistol, a shortened and lightened 1911A1 built using in-stock frames and components, no doubt including several made by Colt themselves and inspired in at least some part by Colt's Commander. The included letter records this pistol with a 4 1/4 inch barrel and "Not Listed" grips as one of five delivered to the Colt Military Marketing Department on January 14th, 1971; the Military Marketing Department is known to have been involved with supplying test pistols (both cut-down Government Models and closer to stock Commanders) to the Army for trials. This information is verified in "U.S. Military Automatic Pistols, 1945-2012" by Edward Meadows, with this pistol being one of two from the January shipment called out by number (see page 114). Also, notes provided by the consignor attribute this specific pistol as one seen on a display board featured in Meadows' book (also page 114) and in Greeley's "The Colt U.S. General Officers' Pistol" (page 164). Overall, the pistol is outfitted as an all-steel Commander (later designated the Combat Commander, as listed on the letter), with the addition of a hand engraved block letter "COLT" and "GENERAL OFFICERS PISTOL/M1969 - CAL. 9MM" on the left side of the slide. A set of textured medallion grips are installed, with a Commercial-style magazine. A Colt "wood grain" box (hand numbered to match, but labeled for a 4 1/2 inch barrel) is included, as is a Lightweight Commander instruction sheet ("LIGHTWEIGHT" struck out), and a black leather Bianchi general officer gun belt rig (34/36 belt, open top #2AL holster, magazine pouch, and a 24k plated Bianchi buckle). A copy of Greeley's book is also included with the grouping. 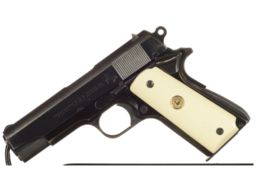 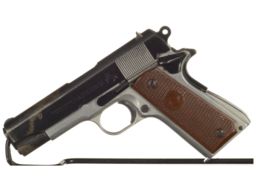 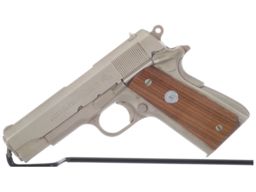 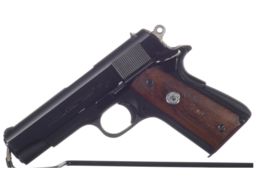 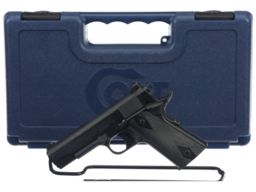 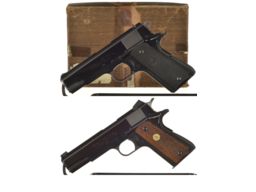