Offered here is a fully documented work of firearm art by the renowned Master Engraver John Ulrich. This is a spectacular example of Ulrich's work and a testament to Winchester craftsmanship at the beginning of the 20th century. As indicated by the accompanying Buffalo Bill Historical Center letter and copies of the original Winchester factory ledger, this rifle was initially shipped on February 29, 1904, with a round barrel in .33 caliber, plain trigger, takedown configuration, half magazine, fancy pistol grip stock, shotgun butt, hard rubber buttplate, style "A" carving, and a $100 engraving and inlay. Note that the factory ledger references the embellishments as "a new design by Mr. Ulrich." Master Engraver John Ulrich has signed his masterpiece on the lower tang just behind the trigger: "J. ULRICH." The rifle was reshipped several times for exhibitions and displays. "Winchester Model 1886 Sporting Rifle No. 129666 belongs to the extremely rare and desirable category of factory embellished firearms used for special shows and exhibitions. Only a handful of these are known to collectors today," states noted firearm historian R.L. Wilson in his included letter of analysis for this rifle. Wilson notes "that because the arm was intended for promotion and display purposes, extra pains were taken in its preparation," such as coverage on the hammer, bolt and lever, platinum inlays and grape leaf foliate scrollwork. Based on the 1904 return dates listed in the factory ledger this rifle was possibly showcased at the Louisiana Purchase Exposition, informally known as the St. Louis World's Fair, held in St. Louis, Missouri, from April 30 to December 1, 1904. At this exposition Winchester had an exhibit in the Palace of Manufactures. Also with a 2000 dated receipt and authentication letter for this rifle from LeRoy Merz of Merz Antique Guns. The rifle is documented in R.L. Wilson's "Steel Canvas" on pages 177 and 242 and "The Official Price Guide to Gun Collecting" (incorrect serial number listed) as part of the color photo section and was featured in a major international loan exhibition by the Royal Armouries Museum. The rifle's engraving pattern is illustrated and described in the "Winchester Highly Finished Arms" catalog reproduced on page 221 of "Winchester Engraving" by R.L. Wilson. The Ulrich engraving features highly detailed gold inlaid animal scenes that depict a mountain goat and a bear on the right side of the receiver, two moose on the left side of the receiver, and a stag head on the underside of the receiver. The inlaid scenes are surrounded by engraved grape leaf and foliate scrollwork highlighted by gold and platinum borders. The bolt has engraved and gold inlaid borders with scrollwork and platinum highlights. The engraving and gold inlay extends to the hammer (both sides and back) and lever. The takedown collar and barrel breech are decorated with scrollwork and gold and platinum inlays. The muzzle has engraved scrollwork flourishes and a gold band. The forearm cap features engraved scrollwork flourishes with gold inlaid borders and platinum accents. The highly figured, fancy grade walnut stock and forearm feature the "Style A" carving illustrated in "Winchester Highly Finished Arms." The pistol grip and forearm featured highly detailed, relief carved scrollwork with leaf accents. The pistol grip has a hard rubber factory buttplate and grip cap. The rifle is equipped with a beaded blade Lyman front sight and an elevation adjustable rear sight. The barrel has the two-line address ahead of the rear sight, the two-line nickel steel marking on the left side, and "33/W.C.F." at the breech. The upper receiver tang is roll-stamped "-MODEL 1886-" which is outlined by scalloped engraving with gold inlaid accents. The Winchester 1884 and 1885 patent dates are on the lower tang behind the trigger. The serial number is engraved on the lower tang in script numerals behind the tang screw.

Excellent, retaining 90% plus original blue finish with the balance thinning to a brown. 70% original case colors remain on the hammer and lever. The wood is exceptionally fine showing minor handling evidence, retaining most of the original finish, and crisp checkering and carving. Mechanically excellent. An impressive and well documented John Ulrich masterpiece that will be a grand centerpiece in even the most advanced Winchester collections. 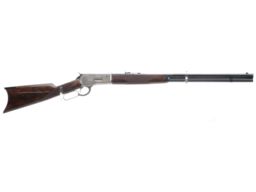 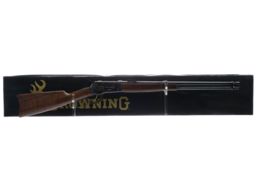 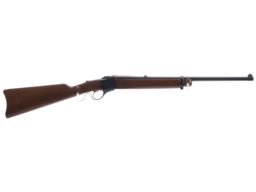 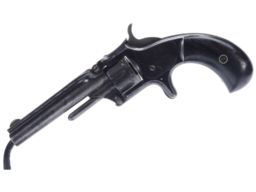 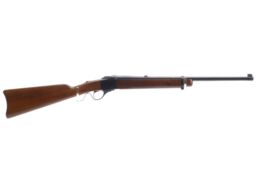 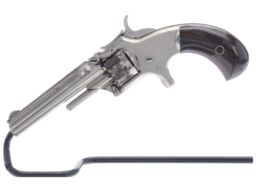