The accompanying factory letter lists this revolver with a 6 1/2 inch barrel in .45 Eley, adjustable "Winans" rear target sight, blue finish and checkered black hard rubber grips when shipped on February 26, 1890, and delivered to American marksman Walter Winans, London, England. This shipment was for four consecutively serialized revolvers (26338-28341). Walter Winans' ownership markings are inscribed on the grip straps. The back strap is engraved "WW/450" above an "X" and 4-dot target pattern and "TARGET 20/1891." The front strap is engraved "A487." As S&W historian Roy Jinks notes in the factory letter, "This revolver is typically marked for one of Mr. Winans' target pistols." British proofs are found on the left side of the barrel and on each cylinder flute. Although not mentioned in the factory letter, but available through the factory, a sling eyelet lanyard loop is mounted on the butt. Matching serial numbers appear on the butt, cylinder, barrel and barrel latch. Standard New Model No. 3 Target revolvers were chambered in .32-44 or .38-44. All other calibers such as .45 Eley are incredibly rare. Walter Winans (1852-1920) participated in the 1908 and 1912 Summer Olympics and won a total of two Olympic shooting medals: a Gold in 1908 and a Silver in 1912. He authored ten books including "The Art of Revolver Shooting," "Practical Rifle Shooting" and "Automatic Pistol Shooting." Apart from his shooting successes, Winans was a noted horse breeder and sculptor who exhibited his art 14 times at the British Royal Academy and won an Olympic Gold Medal in the Arts Competition in 1912 for his statuette "An American Trotter." He is the only American to win medals in both art and sport at the Olympics. His Olympic career was not without controversy. At the 1908 Olympics, Winans' eligibility as an American competitor was questioned because he had never set foot in the United States. Winans was born to American parents in St. Petersburg, Russia where he lived for the first 18 years of his life. Before taking up residence in England, Winans took the oath of allegiance at the U.S. Embassy. He did not visit the U.S. until he was 58 years old. To compete at the Olympic Games, Winans was required to swear his allegiance to the U.S. Consul General. One of the most famous and highly esteemed handgun shooters of the late 19th and early 20th centuries.

Very good plus, retaining 40% original blue finish with the balance a mottled brown-gun metal gray patina mixed with some mild-minor wear from competition matches. The grips are good with repairs at the tops, some minor handling evidence and some wear to the checkering. Mechanically excellent. A perfect chance to acquire a New Model No. 3 Target owned by a world famous Olympian, Walter Winans, for your Smith & Wesson collection! 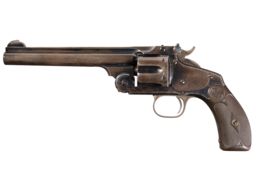 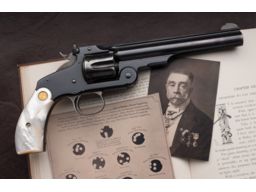 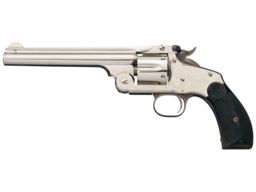 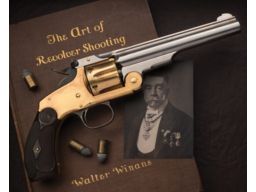 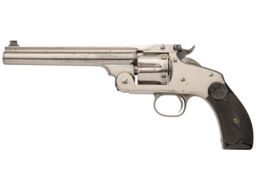 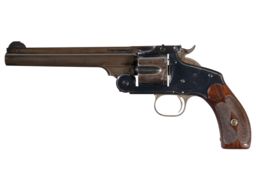