Fine with 85% of the arsenal refurbished black painted finish, and light edge and cycling wear overall. The markings are still clear and visible on the buttsocket. The walnut forestock and handguards are all in very fine condition with a nice matching dark brown color and the serial number clearly stamped towards the front end. The buttstock is in good condition with handling marks and scratches on the sides and a large field repair on the heel of the stock. The scope and mount are both in very fine condition with 85% of their black painted finish overall with finish loss on the ends of the scope and upper area of the scope mount. The optics are clear with the reticle clear. The canvas scope bag and wooden storage chest are both in very fine condition. A solid example of an early British No. 4 Mk I Sniper rifle rig.

This is a solid representative example of an early 1931 production British Enfield No. 4 Mk I (T) sniper that is complete with an original No. 32 Mk III sniper scope, mount, canvas scope bag, canvas carrying strap, Scout Sniper Scope and wooden storage chest for the rifle. This series of rifles (No. 4) eventually became the standard WWII British sniper rifles from 1941 throughout WWII and into the 1960s. They were specially selected for accuracy and then converted by Holland and Holland by adding scope bases to the left side of the rifles to correctly mount and align the scopes. This example is one of the early trials rifles used in 1931 to test out the concept of a British No. 4 sniper rifle. There were approximately 1000 of these made, and then after testing, they were integrated into the regular infantry units. Almost all were reworked during or after the war. The buttsocket is marked: "ENFIELD/1931/No. 4 MK I (T), F.T.R. (twice) /TR". It has the original matching numbered bolt assembly and forend. The receiver is stamped "ENGLAND" indicating it was released for export. It is fitted with an original British WWII scope mount that has two different serial numbers; the top one is "X 33665" partially lined out and "A1986" with a late production No. 32 Mk III Sniper scope with its original British Broad Arrow Proofed lean scope covers. The scope tube is marked, "TEL, SIGHTING , No 32 Mk III, OS 2039A/AK&S No.17731/1945", over a British Broad Arrow proof. The right side of the scope rings are sequentially numbered "605" and "606". It has the standard blade front and folding military tangent rear sights with the battle sight aperture removed to clear the rifle scope. Currently, it is fitted with a walnut forend and top handguards and a beech wood replacement buttstock and cheekpiece. The wrist is stamped with two sets of numbers: "1889" partially lined out over "17731". The stock is the regulation No. 4 pattern with the pot metal buttplate and original cheek piece however it does not have the "S51" markings since it’s a later replacement. It is complete with a late WWII No. 8 Mk 2 canvas scope case and carrying straps that is ink stamped on the front with a "British Broad Arrow proof/L & JW Ltd." The back of the case has an original British Ordnance inspection/repackaging label dated 1962 that reads: "Rifle A1689 and Scope 17731". This lot also includes one of the very rare four-draw British Scout Sniper telescopes with its original leather carrying case and shoulder strap. The last section of the scope is marked: "TEL. SCT REGT. MK II/B.C. 7 Co. Ltd./17164/0.S. 126.G.A". This lot also includes an original British green painted wood transport case with the instructions on the inside lid. The case is marked on the side "CHEST S.A. No. 15 MkI". 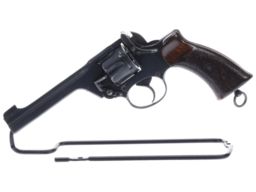 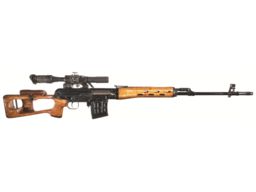 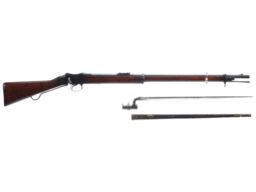 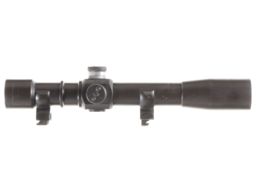 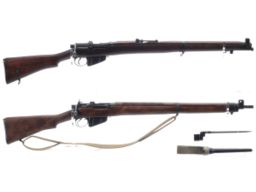