This is an extremely rare example of an original Winchester "One of One Hundred" First Model 1873 rifle with a Cody Firearms Museum letter. Winchester manufactured a total of just eight "One of One Hundred" Model 1873 rifles. Six of these rifles are reportedly known to collectors. The Model 1873 "One of One Hundred" rifles were announced by Winchester in 1875 and were shipped from the factory between April 1876 and April 1878. This rifle, serial number 27179, was the last "One of One Hundred" Model 1873 rifle shipped from Winchester on April 16, 1878. This rifle is illustrated and described on pages 113-118 of "The Story of the Winchester 1 of 1000 and 1 of 100 Rifles" by Edmund E. Lewis. He notes that it was the last 1 of 100 rifle manufactured and seems to get some minor details mixed up with the rifle above it which he notes was believed to have been carried by "R.H. Hapburn" [sic] on the "Collins exploratory expedition to the Amazon and Madeira Rivers of South America in 1878." The elevator is marked with Robert Hopewell Hepburn's initials and "1878" suggesting that this was actually the rifle he was discussing. Hepburn (1850-1944) was an engineer and graduate of the College of New Jersey (now Princeton University) in 1871. He participated in the failed 1878 Madeira-Mamore Railway Expedition during which he is reported to have been in charge of surveys and transporting materials by tug boat from Para, Brazil. Some of the men on the expedition, particularly those of higher rank, are documented as carrying rifles. He wrote an unpublished account about the expedition titled: "Transportation on the Amazon and Madeira Rivers with The Disastrous American Expedition of 1878.” The "Collins Expedition" was the beginning of an attempt to connect Bolivia to the Atlantic Ocean by constructing a railroad from the Bolivian border into Brazil along the Mamore and Madeira Rivers. Some of the men on the Collins Brothers' expedition were killed by native people and many others suffered from scurvy, dysentery, and other medical ailments. Reports indicate one out of every four men brought to work on the railroad under the Collin Bros. from the U.S. perished. Hepburn's own account notes that only 26 of the original 54 engineers survived. The attempt was abandoned for financial reasons. Thousands of men died (6,000+) working on the subsequent construction of the railroad in 1907-1912 due to tropical disease and violence leading to it being nicknamed the Devil's Railroad. The Cody Museum letter describes "Model 1873, serial number 27179" as: "Type: Rifle, Barrel Type: Octagon, Barrel Length: 26 inches, Trigger: Set, Checkered stock, Casehardened" and "1 of 100". The letter states that this rifle was received in the Winchester warehouse on August 16, 1877, and shipped on April 16, 1878. The rifle has the First Model receiver with dust cover retained by grooved guides. The top of the dust cover has the distinctive oval checkered finger grip. The full octagon barrel and full-length magazine have a blue finish. The loading gate and trigger are nitre blue. The forearm cap, receiver, dust cover, hammer, lever and crescent buttplate are color casehardened. The stock and forearm are piano finished, fancy grade walnut with the first style factory checkering on the wrist and forearm. The top of the barrel is engraved "One of One Hundred" in script letters in a panel with scallop and dot borders located between the rear sight and the receiver. The inscription is surrounded by scroll and foliate engraving on a punch-dot background which extends to the barrel side flats. This style of inscription is found on all of the Model 1873 "One of One Hundred" rifles with octagon barrels. The top and sides of the barrel at the muzzle are engraved with identical scroll and foliate designs. Single platinum bands are inlaid on the barrel at the muzzle and breech. This rifle appears to be the only surviving Model 1873 "One of One Hundred" rifles with inlaid platinum bands. The bottom of the brass cartridge elevator is engraved with a fancy entwined monogram "RHH" over the year "1878". The monogram is not noted in the Winchester ledger and was probably added after the rifle left the factory. The top barrel flat is roll-stamped with the two-line legend "WINCHESTER'S-REPEATING ARMS. NEW HAVEN. CT./KING'S-IMPROVEMENT-PATENTED-MARCH 29. 1866. OCTOBER 16. 1860." ahead of the rear sight. The serial number "27179" is engraved on the lower tang between the lever latch and upper tang screw hole. The barrel has a sporting style front sight with nickel silver blade and a buckhorn sporting rear sight with solid back and knurled edges. A Winchester folding graduated peep sight with fifty minute graduations is mounted on the receiver tang. Factory sling swivels are mounted on the forearm cap and stock. The receiver has a single set trigger. The hammer has impressed bordered knurling on the spur. The crescent buttplate has a sliding brass trapdoor and the butt trap contains a four piece steel cleaning rod. This rare rifle was formerly part of the collections of Frank R. Sweet and Arnold M. Chernoff. Although less well known than the Winchester Model 1873 "One of One Thousand" rifles, the Model 1873 "One of One Hundred" rifles are far rarer and represent one of the most elusive variations of special order Winchester lever action rifles.

Fine. The barrel and magazine retain 40% plus of the original blue finish with the balance having aged to an attractive plum blue patina. The barrel shows edge wear on high points with smooth surfaces. The "One of One Hundred" marking on the top barrel flat and the scroll and foliate engraving on the muzzle and breech are crisp. The inlaid bands on the breech and muzzle are tarnished. The monogram and date on the bottom of the cartridge elevator are sharp. The case colors on the receiver, dust cover, hammer, lever, and crescent buttplate have faded to an attractive silver-gray patina. 20% of the original nitre blue remains on the loading gate. There is some shallow pitting on both sides of the receiver ahead of the side plates and several small spots of pitting on the upper edge of the side plates. The highly figured, fancy grade, walnut stock and forearm remain in fine overall condition with scattered, minor handling and storage dings. Most of the finish wear is confined to some dulling on the sides of the forearm. The checkered panels show light handling wear. This is a fine example of the rarest and probably most desirable variation of the Winchester Model 1873 rifle - the "One of One Hundred" rifle. This ultra-rare rifle would be a stand-out piece in the finest collection of Winchester rifles and is the very last "One of One Hundred" manufactured! Provenance: Frank R. Sweet; Arnold M. Chernoff; Carl Press Collection; The Robert M. Lee Collection. 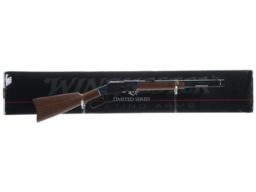 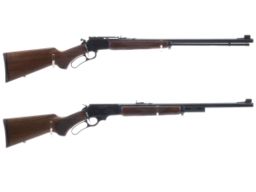 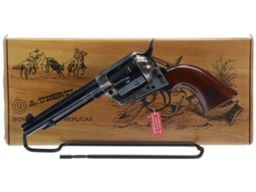 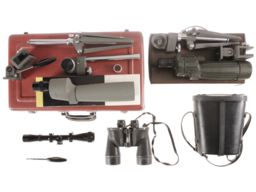 Lot #673: Two Spotting Scopes One Rifle Scope and a Pair of Binoculars 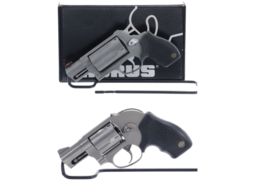 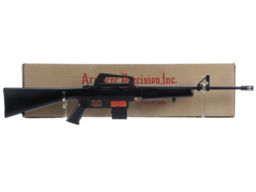 Lot #287: Arms Corporation of the Philippines M1600 Rifle with Box