According to the included R. L. Wilson letter, this one of a kind revolver was originally ordered by Kurtz Hardware Co. in Des Moines, Iowa, and was intended to be embellished and sold to fund the production of two further embellished revolvers to be presented to President Gerald R. Ford in celebration of the Bicentennial of the United States. Colt decided to do a presentation of their own, however, so Kurtz Hardware Co. decided not to follow through with the pair or the planned five gun set. Eventually all of the USA-serial numbered revolvers were masterfully engraved by the semi-retired Alvin. A. White who was given carte blanche to embellish this revolver as though it were for himself. The result is a masterfully engraved single action army revolver, with an extremely rare 8 inch barrel, "in the white", just as it was shipped to White for engraving. The engraving is 50% plus coverage floral scroll with punch dot background in the White/Helfricht style, and is signed "A.A.W." under the right grip panel. The original one piece grip has a wonderfully shaped panel of checkering that completes this beautiful revolver, which is both ornate yet simplistic.

Very fine overall as masterfully engraved by A. A. White and in the white. There are some minor scratches and dings, very limited light spotting, and a light cylinder drag line. The grip checkering is crisp. Mechanically excellent. 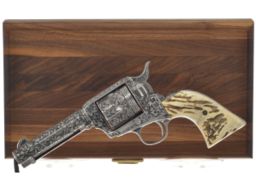 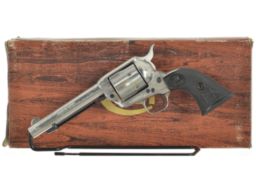 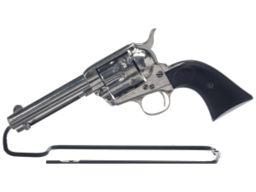 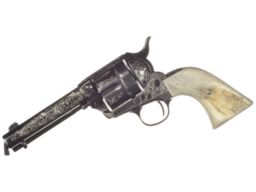 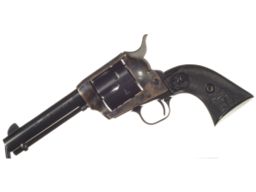 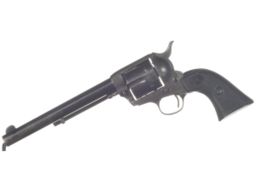