This is an outstanding example of a Spencer Model 1860 Army Rifle that was manufactured by the Spencer Repeating Rifle Company of Boston, Massachusetts c. 1864. The rifle has a 30-inch round barrel with seven-shot magazine tube in the stock. The barrel has a steel block front sight that acts as a lug for a socket bayonet and a dove-tail mounted folding leaf rear sight with 800 yard center notch. Sling swivels are mounted on the middle barrel band and butt. The top of the receiver is roll-stamped: "SPENCER REPEATING-/RIFLE CO. BOSTON MASS./PAT'D. MARCH 6, 1860" in three lines. The serial number is roll-stamped on the top of the receiver behind the ejector cut-out. The left stock wrist is vertically stamped with the Ordnance Sub-inspectors script "HHH" in a rectangle and the Ordnance final inspector's script initials in a horizontal rectangle with rounded ends. A small "H" sub-inspection mark is stamped on the left barrel flat. The rifle barrel has a military blue finish and the forearm cap, barrel bands, receiver, hammer, trigger, lever and crescent buttplate are color casehardened. The stock and forearm are oil-finished American walnut. The Spencer rifles and carbines were the most successful repeating long-arms manufactured during the Civil War. Some of the first Spencer rifles were carried in action at Gettysburg by troopers of the Michigan Cavalry Brigade led by Brigadier George Armstrong Custer. The Spencer rifles were an immediate success; the Ordnance Department purchased 11,470 Spencer Model 1860 Army rifles during the Civil War.

Excellent. This exceptional rifle is close to as-issued and retains 97% plus of the original blue and 90% casehardened finish. The barrel has a few scuff marks at the muzzle from a socket bayonet. The forearm cap, barrel bands, breech-block and hammer have 98% of the strong case colors. The receiver has traces on handling wear along the lower edges. The case colors on the bottom of the lever have faded slightly but remain 95% intact. The crescent buttplate and magazine base show some scattered age spots but retains 95% of the strong case colors. The oil-finished walnut stock and forearm are in excellent plus condition with perfect Ordnance sub-inspection and final inspection stamps. Wear is limited to a few scattered and insignificant storage and handling marks. Although purchased and issued by the Ordnance Department is fairly large numbers, Spencer Model 1860 Army rifles are rarely encountered in excellent or better condition. This exceptional Spencer rifle shows only very minimal storage and handling wear and is one of the few very best Spencer Model 1860 Army Rifles extant. 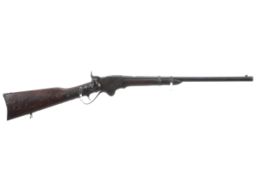 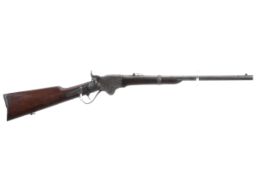 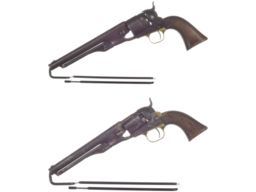 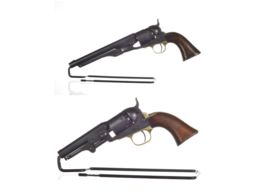 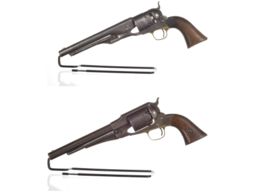 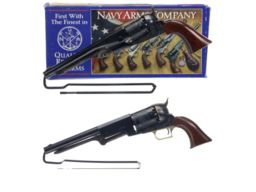