Few weapons in history are as famous or as impressive as the Gatling Gun. The Gatling Gun was originally designed in the optimistic hope of decreasing the amount of deaths in warfare by allowing for smaller forces, and it is true that numerically inferior forces with one or more Gatling Guns and a sufficient supply of ammunition could and did defeat an otherwise superior enemies. They and the machine guns that followed were particularly useful in defending against massed attacks. Sir William George Armstrong, 1st Baron Armstrong, is most famous for his contributions to artillery but also influenced a number of other fields and was a highly successful industrialist. He founded the Elswick Ordnance Works in 1859 as a separate business without his own personal financial involvement since he was also the engineer of rifled ordnance for British government and then recombined it with his other business to form Sir W.G. Armstrong & Company after leaving government service five years later. They were one of the first foreign companies to be licensed to manufacture and sell Gatling Guns beginning in 1869 or 1870. Government records indicate the .45 caliber version was under development and adopted in 1871. The Broadwell magazine on this example was introduced the following year. A .65 caliber variation was adopted for naval and coastal defense as well. The Gatling guns were used in combat operations in the Anglo-Ashanti Wars, Anglo-Zulu War, and in Anglo-Egyptian War. The Gatling Gun changed warfare forever and is traditionally seen as a precursor to modern machine guns which in turn also significantly altered warfare during the First World War. Armstrong continued to manufacture artillery and other weaponry including tanks, machine guns, ships, and a vast array of other items well into the 20th century and even into the 21st century after various mergers and structural changes. This Gatling gun was manufactured circa 1873. The brass manufacturer plate is marked "0.45 INCH GATLING GUN/MANUFACTURED BY/SIR W.G. ARMSTRONG & CO./ELSWICK ORDNANCE WORKS/NEWCASTLE-ON-TYNE." The right rail has the Armstrong Register No. "2754" and most of the other components including the muzzles of the ten barrels are serial numbered "33." The sights are offset to the right. It is equipped with one Broadwell drum magazine and is mounted on a dark green painted 1871 pattern carriage with 37 1/2 inch wheels. The carriage is fitted with two green painted wooden drum magazine carriers, each with steel plated front armored shield. Survival rates of British .45 Gatling Guns are very low with total Armstrong production running to a mere 120 guns. Beyond the example offered here it is believed that only two others are in private hands. The remainder are in museum collections with two retained in the collections of the Royal Armouries, Leeds (one on a land carriage, the other on a naval landing carriage), one in the School of Infantry Collection at Warminster, two in the Institute of Military Technology and one in the Royal Thai Army Museum in Bangkok making a total of approximately 10 extant British .45 Gatlings.

Fine overall with untouched original aged patina on the brass/gunmetal, gray and brown patina on the steel, most of the Victorian lead painted finish remains on the carriage, some minor oxidation, and mild overall wear. Mechanically fine. Gatling guns always get a lot of attention, and are very hard to find. Those made by W.G. Armstrong & Co. are non-existent, with this example being the only one we have ever offered at auction! 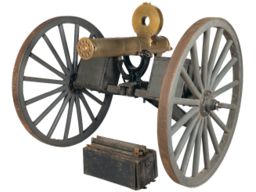 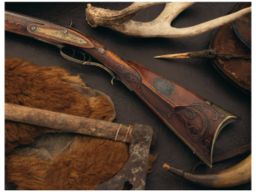 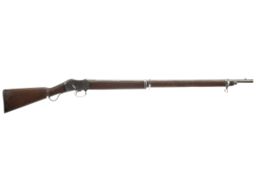 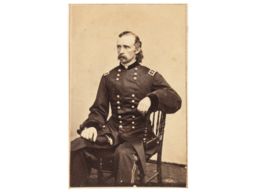 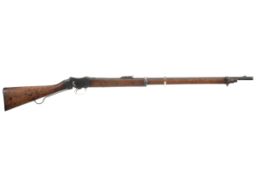 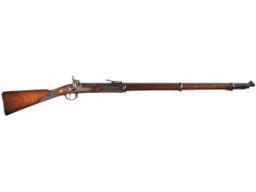