This is a very scarce example of a late pre-WWII MG-13 machine gun as manufactured by the Berlin-Schuler Waffenwerke (BSW) circa 1937/38. This rare MG was manufactured under a commercial contract for the country of Portugal as it is correctly stamped on the right side of the receiver with the large Portuguese Crest/1938, which was the model number of the Portuguese version. Little early history is know about the MG-13 as it was produced at a time when Germany was under the restrictions of the Versailles Treaty (post WWI). The design was an improved/converted version of the original WWI Dreyse Model 1918, water cooled heavy machine gun. This improved model was basically an air-cooled version of the Model 1918. It was originally produced by the Simpson factory after WWI and then later in the mid to late 1930s by the BSW (Berlin-Schuler Waffenwerke) factory. The redesign made it light weight and easy to handle in the field. It was originally fitted with a single side mounted 25 round magazine, and a saddle or double-drum magazine was also developed like the MG-34s, which was the next German machine gun to replace this one. It had a folding bipod permanently attached to the barrel jacket, with a unique side folding buttstock. It has a rotating carrying handle that made it easy to transport and was fitted with a folding front sight with tangent rear sight graduated from 100-2000 like the K98 rifle and a long range folding sight. This example is stamped on the left side of the barrel jacket and the top of the bolt areas with "WaA4" and "Eagle/4" Waffenamt proofs from the BSW factory, and it is also stamped with a "Crown/BNP" proof indicating it was captured/imported into England at some point. The underside of the receiver does have a small importer's mark of "BELLO WPB FL." This desirable machine gun is accompanied by an anti-aircraft tripod, 2 spare barrels in a barrel case, plus 2 additional barrels, 1 leather gunners repair kit (complete with extra bolt and tools), canvas shoulder strap, 6 canvas magazine pouches with 4 magazines in each pouch and 3 ammo cans with eight magazines per can (48 magazines total), 1 canvas bag with sustained ground fire kit with an extra bolt assembly, magazine Loader, and flash hider in a soaking can.

Very fine with 90% of the original blue finish overall with the internal parts still in the white. The proof marks are clear and sharp. Most of the various accessories are in excellent condition. A real treasure trove of spare parts and accessories. NOTE: This weapon is a restricted, National Firearms Act (NFA) Class 3, Fully Automatic Weapon, that is registered with the Bureau of Alcohol, Tobacco, Firearms and Explosives (BATFE) under the provisions of 18 U.S.C. Chapter 44 and 27 CFR part 478. This weapon is currently registered as being "LIMITED TO USE AS A SALES SAMPLE (Pre-86)" and as such can only be purchased by an FFL, with a Class 2 or Class 3 SOT License. 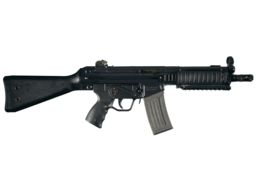 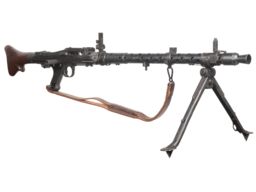 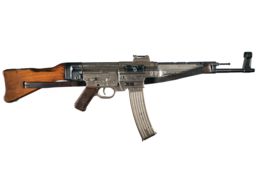 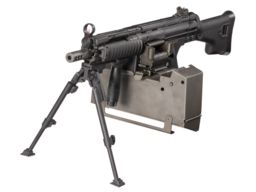 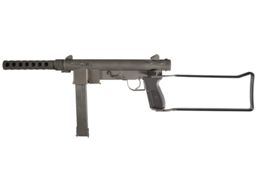 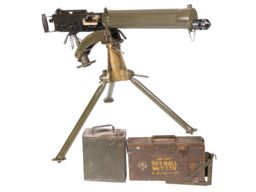