This is truly an unbelievable find for the advance Colt collector or Class III enthusiast. Rock Island Auction Company is proud to present the original Colt AR-15/XM16E1 Model 03 Army Presentation rifle that was presented to the U.S. Army Chief of Staff, General Wheeler, after all the redesign work and testing was completed on the new and improved "forward assist" upper receivers and associated bolt carrier group. The forward assist was the primary recommendation of the Technical Coordinating Committee in 1963, which wanted soldiers to be able to close the bolt manually as they had been able to do with the M1 Garand and M-14 rifles. Colt presented this rifle at some point to the U.S. Army Chief of Staff as the final improved design. It has a unique and one of a kind serial number of "COSUSA1", obviously abbreviated as "Chief of Staff US Army, Serial Number 1". A notarized letter supplied by Gilmore S. Wheeler, Ph.D. holding member of the Company of Military Historians and son of General Earle Wheeler, verifies this as the personal property of the General and relates the events leading up to its creation. By tradition, a team from Colt was directed to visit Wheeler by Air Force Chief of Staff General Curtis LeMay to examine the then-new M16 rifle. LeMay himself had the chance to check the weapon out prior to his promotion to Chief of Staff, and was keen on making it a standard military firearm. For the most part, Wheeler liked what he saw, and thought it had many virtues for jungle warfare (lighter weight, more rounds of ammunition per pound of load, moisture-resistant plastic furniture, etc.), but there was a sticking point. Specifically, he was concerned that a failure to completely feed due to residue or debris in the chamber might put the weapon out of commission, and wanted soldiers to have a way to readily solve the problem without having to stop and clean or disassemble the weapon. This feedback led to the creation of the forward assist, and this rifle (the first test gun made with the newly developed feature) was finely finished and presented to General Wheeler as a memento. It exhibits all the very early Colt M16 characteristics along with a unique, high polish deep blue/black metal finish on all the metal components except for the complete bolt and bolt carrier assembly which are chrome plated and the upper and lower receiver and barrel that have been given a matte type Gold washed/plated finish. Even the plastic components exhibit a high luster, high polish type buffing/finish. A similar golden presentation XM16E1 currently resides in the Springfield Armory Museum in Massachusetts. It bears the serial number 50,000 and is rumored to have been intended as a presentation to President Kennedy. Any original Colt fully automatic M16 type rifle with U.S. Government markings is extremely rare, with this rifle being even more rare as a presentation, and is certainly a "One-Of-A-Kind". The left side of the magazine well is correctly marked with the large circled Colt Rampant Horse logo followed by COLT AR-15/PROPERTY/OF U.S. GOVT./XM 16 E1/CAL 5.56 MM./SERIAL COS USA 1", with the standard "COLT PATENT FIREARMS MFG.CO./HARTFORD CONN./U.S.A.". It has the standard selector switch markings of SAFE/SEMI/AUTO". It has the early full auto bolt carrier with the flat head cross pin, early machined selector switch with the small hole in the center on each side, the early type 1 buffer assembly, the ubiquitous three-prong, open flash hider. The barrel is correctly stamped with "12" on the underside that is fitted with the early all machined front sight/gas block assembly. The barrel is stamped with the inverted Colt "VP" proof and "M" proof on the right side between the legs of the gas block. It has the standard two position flip rear sight. It also includes an early Colt AR-15, Cal. 223 magazine, along with a black web sling.

Excellent with 98% plus of the blue/black metal and gold anodized finish overall, with some very minor edge wear or flaking. The untouched original upper/lower receivers do show some dried grease on the sides giving it a tarnished appearance. The plastic components are all in excellent condition showing only minor scuffs from handling over the years. The bolt face shows no firing wear however it has been hand cycled so there is some wear on the inside of the action and in the magazine well. A really rare, historic, and one of a kind early Colt XM 16 E1 Chief of Staff presentation rifle. NOTE: This weapon is a National Firearms Act (NFA), fully transferable Class 3, which is registered with the Bureau of Alcohol, Tobacco, Firearms and Explosives, (BATFE) under the provisions of 18 U.S.C. Chapter 44 and 27 CFR part 478. 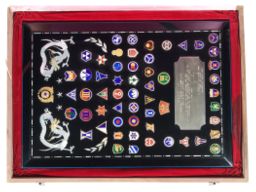 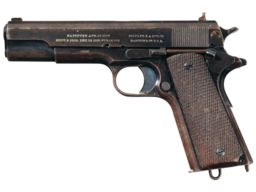 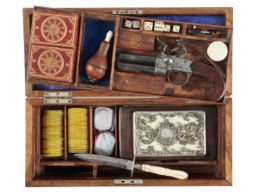 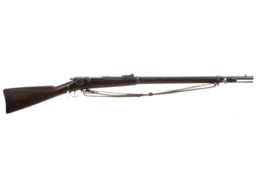 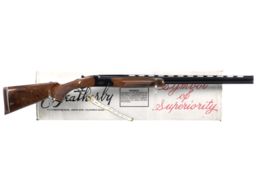 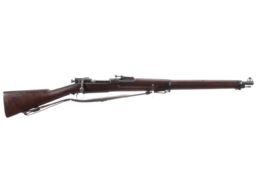