Manufactured in 1915, this is a stunning example of fine Winchester craftsmanship and testament to John Ulrich’s superb skills as a master engraver. The accompanying Buffalo Bill Historical Center letter addressed to noted firearms expert and dealer Herb Glass indicates that although “the serial is too high for us to authenticate the piece from original factory production records,” Winchester Museum Curator Richard Rattenbury firmly believed this rifle to be a factory original as it is in “identical quality and style” of known factory embellished Model 1895s, some of which were a part of the Winchester Museum collection, and pointed out that the rifle was identified as an Ulrich original by Winchester expert and author George Madis in “The Winchester Book” on page 472. Madis noted the special attention given to the magazine and hammer engraving. Madis concluded, “Catalogs advised that magazines of the Model 95 were not ornamented, but here is an exception. Ulrich often did a small amount of engraving on the hammer of the more expensive engraving jobs.” According to Madis a standard Model 95 listed for $32.50, but the added extras on this particular rifle built and embellished for Zane Grey cost an astonishing $335.00 or about $8,476.00 in today’s money! The rifle is also pictured and identified in R.L. Wilson’s book “Winchester: An American Legend” on page 106. The rifle features a factory No. 1 engraving and gold inlay pattern. A deer, mountain lion and grizzly bear are inlaid in solid gold on the receiver. The receiver, upper tang, bolt, takedown collar, hammer, lever, barrel breech and buttplate are engraved with arabesque scrollwork and artistic borders. The scrollwork and engraved borders are accented with numerous gold inlaid borders. A gold inlaid band and an engraved scallop band appear on the barrel at the muzzle. John Ulrich has signed his masterpiece with his “JU” initials on the lower tang. The rifle is fitted with a blade front sight, folding two leaf rear sight and Lyman receiver sight. The receiver sight is inscribed with the original owner’s name in gold: “ZANE GREY.” The deluxe, fancy grade walnut stock and forearm feature Winchester Style B, relief carved scroll and vine designs with a highly polished piano finish. Famed six gun shooter Elmer Keith witnessed this rifle being used by Zane Grey as documented in his autobiography “Keith” on page 170: “I believe I showed Zane Grey the first long-range pistol shooting he’d ever witnessed. He had Bob Carney and Romer Grey shooting at a rock at 400 yards with a .30-06 Model 1895 Winchester that had Z.G. inlaid in gold on the left side of the receiver. They couldn't seem to hit it. So I lay down with my back to a log, took my old 7 1/2 –inch .44 Special single-action Colt, and hit the rock repeatedly.” Zane Grey (1872-1939) was an American author best known for his adventure novels and short stories that romanticized the Western frontier. First published in 1912, “Riders of the Purple Sage” was Grey’s bestselling novel that played a significant role in shaping the Western genre formula and critics have called the book "the most popular western novel of all time." As for Grey himself, he has earned the title “the greatest and most prolific storyteller of the American West.” His literary works have been adapted into 112 films and episodes for three television series, including the “Dick Powell’s Zane Grey Theater,” which ran on CBS from 1956 to 1961. He was an avid fisherman who held numerous records of the day, pioneered the fishing of sailfish, assisting in establishing deep sea fishing off the coast of New South Wales, Australia, traveled to Tahiti, Nova Scotia, Australia and New Zealand to indulge his fishing hobby, co-founded the Porpoise Club in an attempt to popularize the hunting of dolphins and porpoises, and invented the hookless bait known as the teaser that is still used today. Grey's son claimed that his father fished on average 300 days a year throughout his life.

Excellent, retaining 95% plus bright original high polish blue finish overall, the majority of the finish loss appears at the takedown joint which is a mottled patina. The engraving is crisp. The wood is exceptionally fine with some minor handling marks, numerous scattered scratches, most of the original varnish remaining and a crisp carving. Mechanically excellent. Factory engraved, gold inlaid Winchesters rank are the pinnacle of 19th century fine arms collecting. This rifles beauty, importance and rarity are further compounded by its original owner, American icon, Zane Grey. An absolute National Treasure worthy piece of American history. Provenance: The Legendary Mac McCroskie Collection 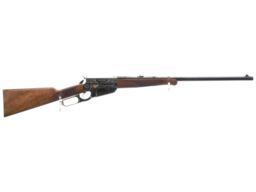 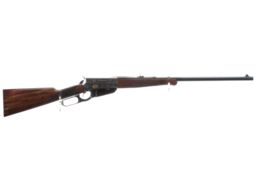 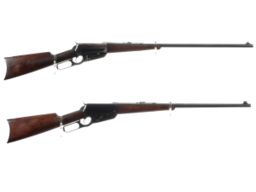 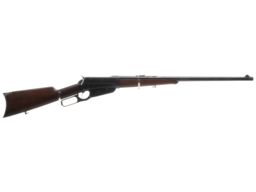 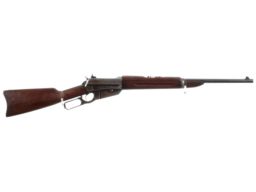 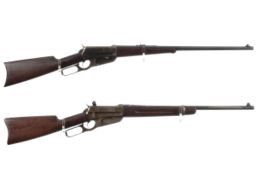