Manufactured in 1874. This early production SAA has a desirable nickel plating, two-line patent dates frame marking, one-line Hartford barrel address, "45 CAL" on the left side of the trigger guard, correct bullseye ejector rod head, mismatched cylinder ("1895"), unnumbered barrel and matching serial numbers on the frame, trigger guard, and back strap. An accompanying six page letter of provenance provided by the consignor states the revolver was inspected by several Colt SAA experts including Joe McBride, Mark McCord and Ron Graham who have confirmed that this revolver is all original, except for the mismatched cylinder which was deemed "a replacement made by a Mexican gunsmith." We, however, believe Colt manufactured the cylinder. The revolver was originally intended to fill a U.S. government contract but did not meet military specifications. Thus the revolver was redirected to the civilian market, as also concluded by Graham. The barrel and cylinder were likely rejected by government inspectors and subsequently salvaged by Colt and utilized on this commercial production SAA. The revolver does fall into a serial number range (1656-2979) of SAAs known to have been delivered to the U.S. government. Unfortunately, Colt historical records are unavailable for this revolver. The consignor further states, "This gun was obtained in the 1950s from an African American resident of Austin County, Texas, and has been in the possession of the current owner (as of January 2019) since that time. The man from who it was obtained indicated that it had been 'passed down' to him from family members." The consignor hypothesized that the revolver was issued to Seminole-Negro Indian Scouts hired by the U.S. Army in 1870 to provide scouting services to the Cavalry and one of these Scouts was a distant relative of the African American from Texas who had owned it since the 1950s. Comes with a hobbyist gun wall mount and Keith Cochran's "Colt Peacemaker Collector Handbook and Guide" and "Colt Peacemaker Encyclopedia, Vol. 2".

Very fine, retaining 70% original nickel plating with the balance a smooth dark brown patina. The cylinder pin screw is absent. The grip is fine with high edge wear, minor handling marks and much of the original varnish remaining. Mechanically fine. 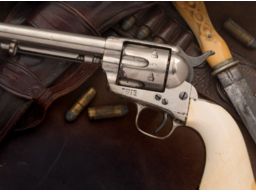 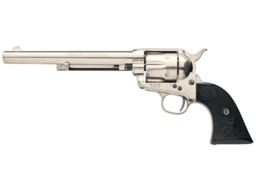 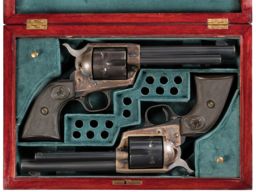 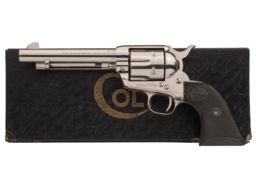 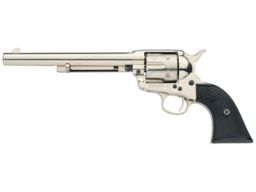 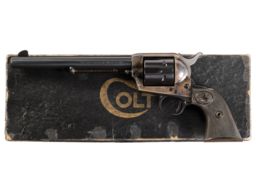