This Henry lever action rifle was manufactured by the New Haven Arms Company c. April 1865 and issued to Corporal Isaac Marshall, Company I, 3rd Veteran Volunteer Infantry Regiment (3rd VVI). This rifle is accompanied by a letter from the Springfield Research Service, copies of Corporal Marshall's Civil War service records and a history of the 3rd VVI. The three VVI regiments were organized late in the Civil War to act as elite units composed of veteran soldiers. The VVI regiments were armed with Henry, Sharps and Spencer rifles. As an enlistment bonus, VVI soldiers were authorized to keep their individual weapons when they were discharged from service. The Civil War ended before the VVI regiments saw any action. The records provided with this rifle indicate that Corporal Marshall was mustered out of Federal service on July 20, 1866 at Camp Butler, Illinois. The Ordnance Department purchased 627 Henry rifles in April and May 1865. These rifles, along with a few of the approximately 1100 Henry rifles purchased by the Ordnance Department in 1863-64 to arm the 1st D.C. Cavalry regiment, were issued to the 3rd VVI and are listed by serial number in the regimental records. Unlike the rifles purchased for the 1st D.C. Cavalry, the only Ordnance mark on the 1865 rifles is a tiny "J.T." inspection mark stamped in block letters on the left side of the stock wrist. Due to the size and location of the marking it is rarely visible on rifles with any significant handling wear. Aside from the inspection mark, this rifle has all of the usual features of a late Civil War production Henry rifle. The octagon barrel and integral 16-shot magazine have a military blue finish. The barrel has the late style, square-back, nickel silver front sight and the final style folding leaf rear sight with rounded elevator bar ends, 900 yard center notch and elevator bar stop screw. The magazine has the late, large-diameter follower head, and the lower receiver has a beveled follower slot. The left side of the stock and barrel have the sling swivel and screw-mounted loop for a sling hook which were standard on late production Henry rifles. The buttplate is the late style adopted after serial number 5000 with sharply pointed heel. The buttplate and tang screws are the late style cap screws which lack the serial numbers found on the shanks of the hand-fitted screws on early Henry rifles. The bolt has a fire blue finish. The hammer, lever and trigger are casehardened, and the straight grain American walnut stock is varnished. The receiver, buttplate and cartridge elevator are brass with a natural finish. The top barrel flat is roll-stamped ahead of the rear sight with the second style legend: "HENRY'S PATENT OCT. 16. 1860/MANUFACT'D BY THE NEWHAVEN ARMS. CO. NEWHAVEN. CT." using all serif letters. The serial number: "8816" is stamped: (1) on the top barrel flat behind the rear sight, (2) on the left side of the lower receiver tang, (3) in the upper tang inlet of the stock and (4) on the inside of the buttplate. All of the visible serial numbers match. The "H" inspection mark of B. Tyler Henry is stamped on the lower tang behind the lever latch. This rifle is complete with the very rare black bridle leather Henry sling and four-piece, jointed steel cleaning rod supplied with later production Henry rifles.

Extremely fine overall. This rifle is all original and retains at least 60% of the original blue finish. This rifle is in exceptional condition for a U.S. issue Henry rifle and is one of the very best U.S. 3rd VVI Henry rifles extant. The barrel/magazine have a smooth, dark, plum brown patina and show significant amounts of original blue finish in protected areas. The New Haven Arms Co. legend and serial number are sharp. While bore condition is not part of RIAC's normal criteria, it is in this writer's opinion the bore is excellent. Both the front and rear sights are original to the rifle and remain in excellent condition. The brass receiver and buttplate are both in excellent condition with a very attractive, untouched patina. The receiver has perfect side-plate joints. The buttplate has a few insignificant scratches but remains in excellent condition. 40% high polish blue finish is present on the bolt. The hammer and trigger retain 50% of the mottled original case colors. The lever has a smooth brown patina. The stock remains in very-fine to excellent condition and retains 90% of the original varnish finish. Wear is limited to a few very insignificant handling marks. The tiny Ordnance inspection mark on the left side of the stock wrist is legible. This is a truly excellent, fully documented example of a scarce and highly desirable U.S. Henry rifle issued to the 3rd VVI. 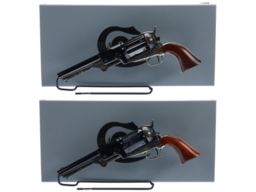 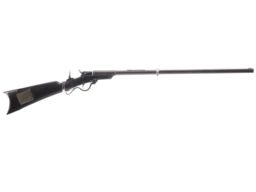 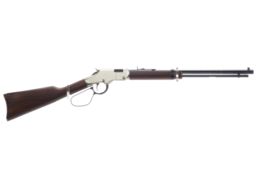 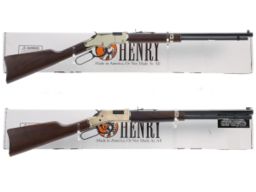 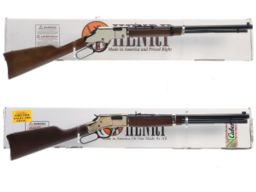 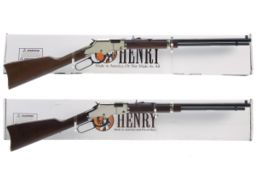