Extremely Rare Documented Fabrique Nationale High Power Semi-Automatic Pistol, Serial Number '1', with Authentication Letter by FN Among the First Weapons Made After the Liberation of Belgium in 1944

Extremely Rare Documented Fabrique Nationale High Power Semi-Automatic Pistol, Serial Number '1', with Authentication Letter by FN Among the First Weapons Made After the Liberation of Belgium in 1944

Included with the pistol is a letter from Fabrique Nationale, which discusses this item. In it, it is related that the serial number "1" marks it as part of a limited run of 500 pieces manufactured at FN in 1944 for sale to U.S. military officers, this one delivered to a Colonel Taylor on October 2, 1944. This would be an extremely early date of manufacture for a liberated Belgian pistol; the Allies had only entered the country in the beginning of September, and sections of the land would remain in German hands until February of 1945. "Colonel Taylor" is not explicitly identified, and there are a few candidates, such as future Four-Star General Maxwell D. Taylor (then a permanent Lieutenant Colonel with a "theater rank" of Major General) with the 101st Airborne Division. The letter also discusses an inscription on the pistol (described as "VINCENT J. JACKSONS", is actually "VINCENT J. JACKVONY" on the item itself), for which they have no records or insight. According to an October 1945 dated G.I. capture paper (copy), this pistol was brought into the U.S. by Vincent J. Jackvony, the individual whose name is inscribed on this pistol. The pistol is fitted with fixed blade front and tangent rear sights, with the three-line FN address and Browning patent markings on the left side of the slide, "VINCENT J. JACKVONY" engraved on the left side of the frame, and a set of matching stacked "1" numbers on the right side of the slide and frame. A Nazi "WaA140" inspection mark is present on the left side of the barrel, possibly indicating use of components left over from Occupation production to fit out this set of pistols. The back strap is slotted for a shoulder stock, and the magazine well safety has been disabled. Fitted with a set of checkered plastic grips. A hardwood case with French cut red velvet interior is included.

Excellent, with 98% of the original factory blue finish, showing some light edge wear, and scattered light handling marks. A few hints of a brown and gray patina are forming on the grip straps, and the grips show a few light scratches and dings. The custom case is very good, with a small split in the left side of the lid and minor dings and scuffs. Mechanically excellent. 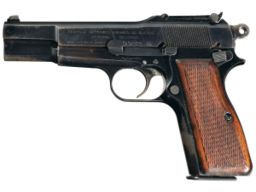 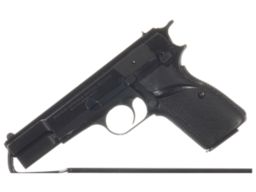 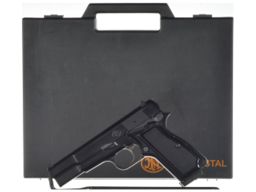 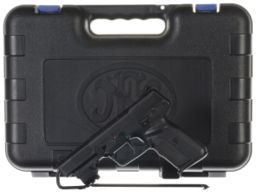 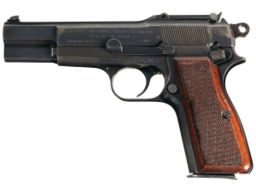 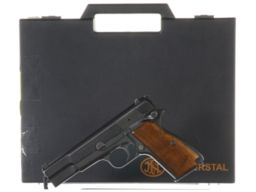