Today this revolver is rightfully recognized as a great historical rarity in gun collecting. It is a tangible link to 19th century American gun manufacturing, carrying with it a fascinating tale that encompasses advancements in firearms design, company rivalries, and American capitalism. It was 1872, and Winchester just hired former Smith & Wesson employees William W. Wetmore and Charles S. Wells to develop a revolver. Winchester's board of directors planned on making a big splash in the revolver market and planned on doing so at the Centennial Exhibition held in Philadelphia in 1876. To say that the directors were ambitious would be an understatement. The company was still enjoying the success and profits that came with the improved design of the Henry rifle, the Model 1866, and its iron frame successor the Model 1873 and were looking forward to the introduction the Model 1876 at the time of Centennial celebration. But the revolver market eluded the company. Colt emerged as the big winner in the revolver market, winning a series of highly competitive U.S. Army contracts and also a large share of the civilian market with its Single Action Army. Smith & Wesson also won a few U.S. contracts and had a large civilian following. In the early 1870s it was announced that the U.S. government as well as the Russian government were in the market for a new side arm. Smith & Wesson as well as Colt competed for these contracts but what many people do not realize so did Winchester. The famed lever action rifle company invested a great sum of resources and money to the Centennial Exhibition, and their Wetmore-Wells revolver samples were introduced to the public. Later their designs featured chambering for a new series of experimental cartridges developed by Wells and experimental ejector systems that included a swing out cylinder design by Stephen W. Wood. It is Wood’s swing out cylinder ejector system that is prominently featured on this revolver. As noted Winchester historian and author George Madis explained in “The Winchester Book” (page 573), “[The Wood] ejector system is essentially the same as those in use on the majority of revolvers manufactured today. To eject, the knurled piece under the barrel was pulled toward the muzzle and the cylinder pivoted out of the frame to the right. The end of the rod was then pushed to eject.” The swing-out cylinder and push rod ejector system made this revolver one of the most innovative designs for its time. In fact, the first mass production of a swing-out cylinder and cylinder pin ejection revolver in America was Colt’s Model 1889, which was introduced some 13 years after this revolver was built. The Wetmore-Wood revolver is a testament to Winchester’s aggressive and creative approach to handgun development, made more astonishing for a company that never mass produced a single revolver. The Wetmore-Wood revolver and those that preceded it demonstrated Winchester’s ability to enter the highly competitive handgun market had they chosen to do so. These series of Winchester revolvers were of ahead of their time. In 1883 Colt, the handgun manufacturing king, began production on the Burgess Lever Action Rifle that threatened to encroach on Winchester rifle sales. One can easily see Winchester’s Centennial 1876 revolvers becoming serious bargaining chips to force Colt out of the rifle market. As legend has it "two representatives from Winchester met with the President of Colt to discuss a new product they had developed and planned to put on the market. The men brought with them two pistols to be evaluated of which the ‘ace in the hole’ was the certain desirable features on the revolvers that had not yet been incorporated into their own line. While no formal agreement was made it is widely believed the men had come to a ‘gentleman’s agreement’ where Colt would discontinue the Burgess rifle, which it did in early 1885, and Winchester would cease to develop revolvers.” For further reading on the "gentleman’s agreement” see Williamson, page 111. As identified in Herbert Houze’s “Winchester Repeating Arms Company” on page 103, this revolver was submitted by Winchester to the U.S. Navy Ordnance Bureau in December 1876. A U.S. Navy contract never materialized. The Ottoman government, however, issued a contract for 30,000 revolvers in June 1877. The revolvers were designated the Model 1877, but to this day it remains unclear how many, if any, of the revolvers were delivered. For additional information see Herbert Houze's "Winchester Repeating Arms Company.” Note that other publications have referred to Winchester’s 19th century series of experimental handguns as Winchester-Borchardt revolvers. An examination of the historical record has shown Borchardt's participation in the design of these revolvers was minimal. As stated, this revolver features Stephen Wood’s signature swing-out cylinder ejector system. It lacks factory markings, including a serial number. It has a solid casehardened frame, single action mechanism, six shot fluted cylinder, blade front sight, frame sighting groove and lanyard ring mounted on the butt. In the accompanying letter by noted firearms historian R.L. Wilson, a total of 13 Winchester revolvers of all designs are said to have been built, and, at the time the letter was written, only one remained unaccounted for. Very few are in private collections. Of the 13, only four revolvers had the swing-out cylinder design. According to Wilson, the revolver was discovered in the Washington, D.C. area circa 1950 around the time it was released from the U.S. Navy collection. The revolver was the cover story to the November 1959 issue of “The Gun Report.” Comes with a photo album containing the Wilson letter, consignor research related to the Centennial 1876 revolvers, and the “The Gun Report” article in the November 1959 issue.

Excellent. The barrel and cylinder retain 90% original blue finish thinning to a brown. 80% plus of the original case colors remain on the frame, hammer and trigger guard. The grips are excellent showing limited handling marks. Mechanically excellent. A monumental, once in a life time offering. Provenance: the Mac McCroskie Collection 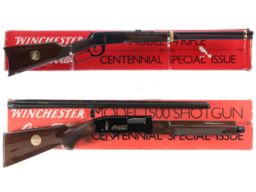 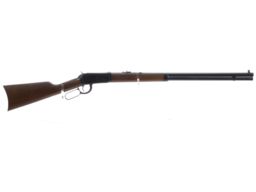 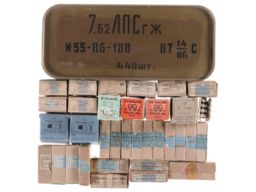 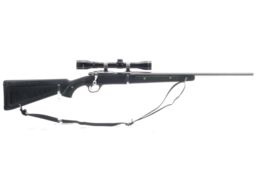 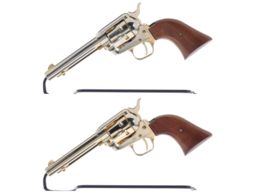 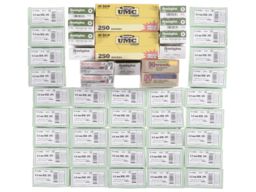