Offered here is a crown jewel of Winchester collecting: "only factory gold inlaid Model 1873 (other than inscriptions of barrel bands) currently known to collectors," as R.L. Wilson proclaimed in "Winchester Engraving" (page 195). Another surfaced after he made that statement, and we believe there are four now known. This high grade rifle embellished by renowned Master Engraver John Ulrich was built for display at the 1889 Exposition Universelle held in Paris, France. Held from May 6 to October 1889, the Paris Exposition Universelle coincided with the 100th anniversary of the storming of the Bastille, the incident that sparked the French Revolution. A world's fair, the exhibition spotlighted international advances in science and technology while also showcasing artifacts from the world's past. The iconic Eiffel Tower was commissioned which stood as the entrance to the fair and in 1889 was the tallest man made structure in the world. Exhibitors and displays were judged by juries of experts in each respective field. "Grand-Prix" was awarded to the best in each class then gold and silver respectively. Mr. Gastinne-Renette, the renowned Paris gunmaker, served as the foreman of the jury responsible for judging the firearms displays. Mr. Renette in his official report on the fair gave credit to the "superiority of the United States for wholesale manufacture of repeating arms." It was the United States policy that all U.S. exhibiters be overseen by the State Department. In total, exhibitors from the United States received twelve gold medals among them were; "Colt's firearms Manufacturing Company of Hartford" and "Smith & Wesson of Springfield." The United States was only awarded two Grand-Prix champions; John B. Stetson & Co. of Philadelphia for "hats" and lastly The Winchester Repeating Arms Company of New Haven, for "firearms". The original solid gold Grand-Prix champions medallion still accompanies this rifle as does a pierced and engraved plaque. The accompanying factory letter lists this historic rifle with $50.00 factory engraving and gold inlay, octagon barrel in .44 caliber, blue finish, plain trigger and checkered pistol grip stock when received in the warehouse on March 13, 1889. Although no shipping date was provided, the Winchester ledgers list the rifle as designated for Paris, which refers to the 1889 Exposition Universelle. Ulrich signed his work "J. ULRICH" in small letters just behind the trigger. The embellishment consists of engraved scrollwork and flush gold inlaid borders on the receiver, barrel at the muzzle and breech, forend cap and buttplate tang. Additional engraved scrollwork appears on the hammer, dust cover, cartridge elevator and lever. The third model receiver features fine engraved game scenes inside circular panels: a bighorn sheep on the left side and a moose on the right side. Detailed gold inlaid game scenes are featured on the side plates: a bull elk and doe motif on the left and a bear on the right. The screw heads are engraved with floral patterns. The barrel is stamped with the two-line address/patent dates marking ahead of the rear sight and "44 WCF" marked amongst the scrollwork at the breech and is equipped with a blade front sight and elevation adjustable rear sight. The cartridge elevator is marked "44 CAL." The upper tang is marked "MODEL 1873." Engraved accents surround the serial number on the lower tang. The highly figured forearm and pistol grip stock feature multi-point checkering. The buttstock has a horn grip insert, is fitted with a trapdoor buttplate and contains a four piece cleaning rod. Fair organizers recognized the display by awarding Winchester with a gold medal. The exhibition engraving and inlay on the rifle is indicative of the rich quality and style of John Ulrich and makes clear to all who see it that Winchester was worthy to bring home gold. This rifle is pictured and identified in R.L. Wilson's "Winchester Engraving" on page 195.

Fine. The rifle has a mottled gray patina. 40% original nitre blue remains on the loading gate. The engraving is crisp. The wood is fine with minor dings and scratches, retaining most of the finish and crisp checkering overall. Mechanically excellent. Do not miss this once in a lifetime opportunity to acquire an extremely rare factory gold inlaid Model 1873 rifle signed by renowned Master Engraver John Ulrich and documented as being displayed at the Paris 1889 Exposition Universelle. As a Winchester crown jewel, this Model 1873 is a must have for the serious collector! 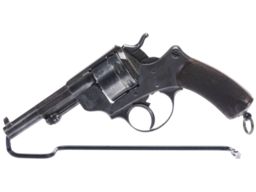 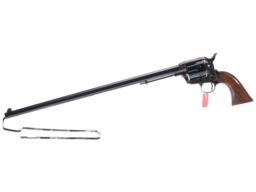 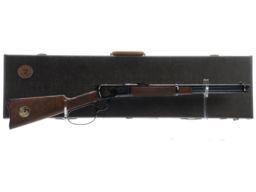 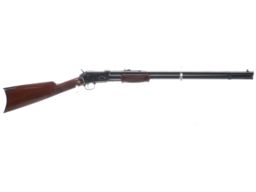 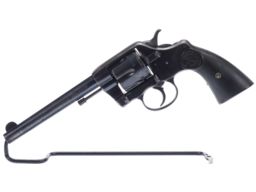 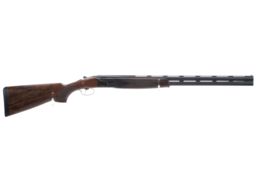