This U.S. Colt Model 1847 Walker Revolver is doubly rare as it was issued to Walker's own company: C Company of the U.S. Mounted Rifle Regiment. The story of the collaboration between Colt and Walker has been repeated countless times. When Colt's basic idea of a revolving pistol was combined with Walker's knowledge of what the army needed, it created one of the most famous guns in the world and made Colt one of the richest men in America. 220 of the 1,000 Walkers manufactured to fill the Army contract were marked for Walker's famous C Company. The C Company Walkers were the first manufactured at the Whitneyville Armory for Colt to fill his first contract with the U.S. government. Colt at that time had no factory. The C Company revolvers were shipped to the U.S. Army Depot at Vera Cruz, Mexico, in September 1847. Walker was killed on October 9, 1847, at the Battle of Huamantla while leading his men. On October 19, 1847, 214 of the C Company marked Walker Colt revolvers were issued to the First Regiment Texas Mounted Volunteers commanded by Colonel John Coffee Hays. Known as "The Texas Devils," the Texas Mounted Volunteers used their Walker Colt revolvers in a number of actions against Mexican irregular forces operating between Mexico City and Vera Cruz. Of the 394 Walker revolvers issued to the Texas Mounted Volunteers, only 191 revolvers (of which 82 were serviceable) were turned in at the Vera Cruz Depot when the regiment was mustered out of federal service on May 8, 1848. This revolver was formerly in the collection of Gordon Francis Kibby who was rightly very proud of the revolver and used it in his letterhead as can be seen in the included cover letter from Kibby in 1979 that accompanies his discussion of the Walker revolvers, including this one which he indicates he acquired around 20 years prior. Kibby indicates he purchased the revolver from a Joe Betty of Kalamazoo, Michigan. Betty was a pilot and indicated he traded three cartons of cigarettes for the revolver from a local while in Vera Cruz, Mexico, which is 150 miles due east from where Walker met his end and the location of the depot noted above. Kibby also notes: "The Walker took first award in competition with over a thousand competing at the 1961 NRA Mich[igan] show [in] Saginaw and at the [Grand] Rapids 1971 NRA show. The page from the January 1971 issue of "The Gun Report" discussing the Michigan Antique Arms Collectors Association meeting at the Grand Rapids show in 1971 states Kibby and his Walker won the "Best Single Arm" award. In a rough draft for an article written by Kibby in 1966, he discusses the pleasures of gun collecting and states he purchased the revolver for $2,800. Also includes scans of pages from Michigan newspapers in 1956 and 1961 showing and discussing Kibby's collection and the Walker as well as other documents related to Kibby and the article "Captain Samuel H. Walker R.I.P. or Where is Sam Walker?" from "Man at Arms" by noted gun collector Frank Graves discussing Walker's death and his own revolvers. The barrel has a German silver blade front sight, no visible address, "US/1847" above the wedge screw on the right, and "C COMPANY No 81" on the left side. "C COM-Y No 81" is marked on the trigger guard between the bow and screw. "81" is visible on the front of the frame, left side of the frame, and bottom of the arbor pin. No number was marked on the loading lever (it is nearly impossible to find Walkers with original loading levers as this example has), and none is evident on the cylinder. A removable "JF93" (Jim Frisbie Collection Number 93) collection marking is on the trigger guard bow.

Very good with an even brown patina mixed with light pitting on the iron parts, well-worn markings, and mellow to dark patina on the brass trigger guard which has a slight bend. The front sight has been worn and reshaped, and one of the barrel pins sheared off and was long ago rusted in place in the corresponding hole on the barrel. Two of the nipples are replacements, and two more are broken. The nose of the hammer has been reshaped to a point long ago, and there is no difference in patina. There are some tool marks on the arbor pin which has the same wear and pitting in the fouling grooves as the rest of the pin and revolver. The grips are expertly done old replacements and are very compatible with the appearance of the revolver as are the wedge and lever latch. Some screws might be replacements as well, but the major parts are all original. Mechanically fine. 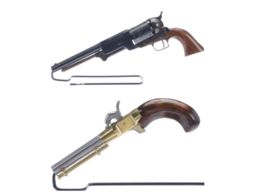 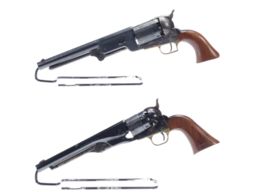 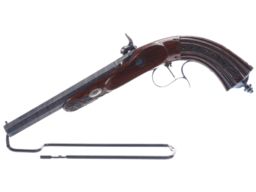 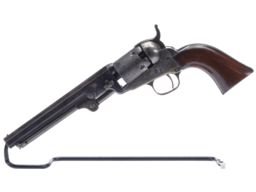 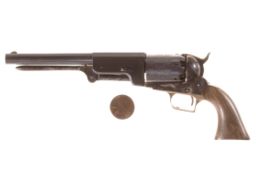 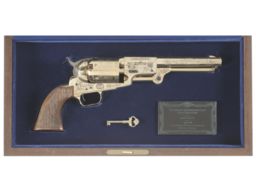