The barrels each retaining 90% blued finish, the original barrels were factory reblued when they were shortened, the additional barrels retaining their original blued finish. There is some wear and a small scratch at the muzzle of the left barrel of the extra barrel set. The under rib of both sets of barrels are engraved with the importer’s details “Woodcock Hill Benton PA” beneath the forearm. The action and locks each retaining 70% thinning original casehardened finish with some wear to the fences. Trigger guard with 60% original blued finish with some handling wear to the tang. The engraving remains crisp throughout. The stock has minor blemishes throughout and a small chip to the right edge of the forearm. The mechanism now fires the right barrel first. Mechanically excellent. The case has some handling wear to the exterior leather. A fine example of a heavy game gun from the most prestigious gun maker during what is regarded as the best period of British gunmaking. 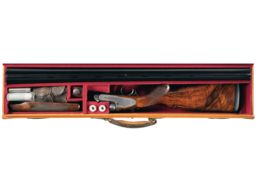 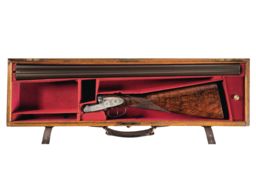 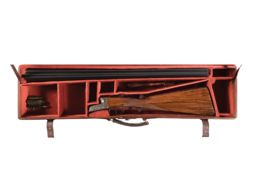 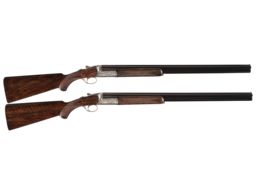 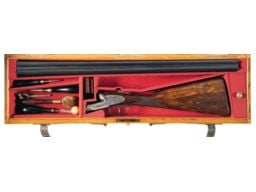 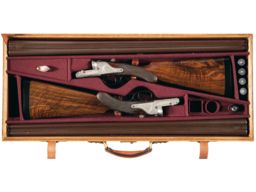