Only around 2,000 of these round barrel Pocket Navy revolvers with ejectors were manufactured around 1873-1875. This one was subsequently professionally engraved with Gustave Young style scroll engraving. The barrel has a pin front sight and the New York address on top. The cylinder has the stagecoach scene. The frame has the standard patent marking. The visible numbers match. "IE" has been added by the number on the trigger guard and butt. It comes with a hardwood case with "E.W.B." inscribed on a plaque on the lid, cartridge block holding five rounds of ammunition, L-shaped combination tool, and a key.

Very good as embellished and refinished including some remarked or added markings. 95% plus of the silver plating remains, and the engraving and markings are crisp. The action functions; however, the timing is off, and the firing pin is altered and would not strike. The period grip is also very good and has attractive natural aged tones and grain, mild handling and edge wear, age cracks, and minor scratches and dings. The custom made case is very good and has mild overall wear. 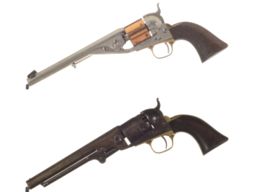 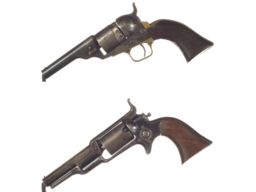 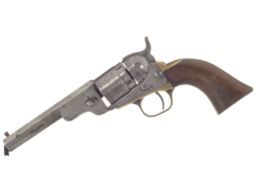 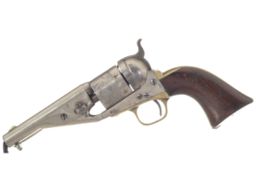 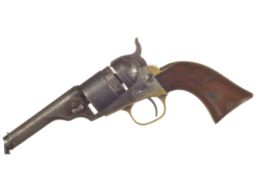 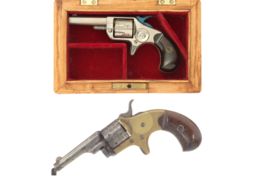