This extraordinary and historically significant newly discovered Colt is one of very few known factory panel scene engraved SAAs. Similar examples have found their way into some of the most prestigious private collections owned by renowned Colt collectors such as Robert Lee, Raymond Vanyek, and Robert Hable. The extraordinary engraving mostly consists of masterfully executed foliate arabesque patterns on a very fine stippled background. Finely detailed engraved panel scenes are featured on both sides of the frame. The left side of the frame has a grizzly bear handgun hunting scene, and the right side of the frame has a buffalo handgun hunting scene. A third panel scene is engraved on top of the back strap. This vignette depicts a Native American warrior on horseback and wearing a full headdress. The fully engraved hammer has the foliate pattern as well as a grotesque mythical beast head on both sides, eight punch dots, which likely indicates 80 total hours of engraving, just below the spur checkering, and fine geometric line patterns and cross hatching on the back. The trigger guard shoulders feature engraved cross hatching, and an engraved wide ornate band appears on the barrel at the muzzle along with the foliate pattern surrounding the standard blade sight. The trigger guard serial number is inside an engraved banner. This 19th century high art SAA is an utter masterpiece! Pictures will do far better than words! The one-piece grip is finely checkered. Full nickel plating and niter blue screw heads, cylinder pin, and trigger. Matching serial numbers are on the frame, trigger guard, back strap and cylinder. A small group of factory panel scene engraved SAAs were part of Colt’s exhibit at the Centennial International Exhibition of 1876 held in Philadelphia, Pennsylvania, from May 10 to November 10, 1876. It was America’s first official world’s fair, and it celebrated the 100th anniversary of the signing of the Declaration of Independence in Philadelphia. Colt’s Centennial “wheel” display, which consisted of elaborately engraved SAAs at the center, was perhaps the factory’s most spectacular display in its history. The Centennial SAAs were later loaned to the Henry Folsom Co. of St. Louis and were returned to Colt in October 1877. Naming the engraver behind these masterpieces is up for debate, and contenders include the most notable master engravers of the period such as Gustave Young and Herman Ulrich. This SAA was manufactured in 1879, too late to be included in the famed Centennial exhibit. Nevertheless, this elaborately embellished revolver is most certainly equal to the known Centennial SAAs. Considering the notable similarities to the Centennial exhibition engravings and the chambering in .455 Eley, a popular cartridge within the British Empire, it is reasonable to conclude that the revolver was showcased at an exposition overseas. The Melbourne International Exhibition, for instance, opened on October 1, 1880, about a year after this revolver was manufactured, and closed on April 30, 1881. It was a World's Fair with representatives and exhibitors from around the world, including those from America’s firearms industry: Colt, Gatling Gun Co., Parker Bros., Providence Tool Co., Smith & Wesson, and Winchester. As reported in the April 30, 1881 edition of the Boston Daily Globe, Colt Patent Firearms Manufacturing Co. was one of many award winning American exhibitors at the 1880 World’s Fair. Exhibitors and displays were judged by juries of experts in each respective field, and Colt was awarded “second degree of merit” in the category of shotguns.

Excellent, retaining 95% plus totally untouched original nickel finish with some finish loss visible forward of the trigger, a patch of light pitting visible on the recoil shield and minimal light flaking. 90% original niter blue remains on the small parts. The engraving is crisp. The grip is also in excellent condition with some age stress lines and very crisp original checkering. Mechanically excellent. A most extraordinary, exceptionally rare, factory panel scene engraved Colt SAA that is a true work of 19th century art that transcends the firearms collecting fraternity. 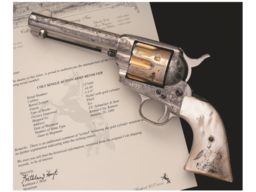 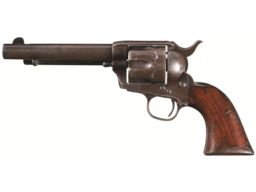 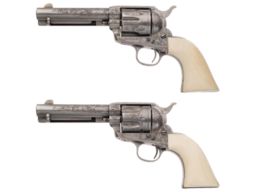 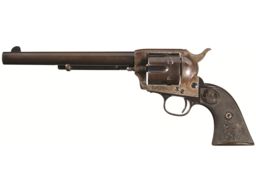 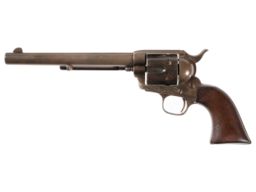 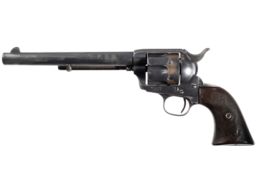