One of only 50 produced, all in the 22401-22450 serial number range, this specimen is the finest known example of an extremely rare 1902 DWM Luger that has been fitted with the unique "Powell Indicating Device", commonly called a "Cartridge Counter" on the left side of the grip. Produced on order from the U.S. Board of Ordnance circa 1902-1903, the Cartridge Counter model is nearly identical to the Model 1900 Test Luger, with the addition of the Powell Device, which consisted of a magazine configured to have a cutout and guide screw extending through the left side and a 3 1/4 inch long slot in the left grip, aligned to match the magazine, with a guide numbered one through seven and a celluloid window to protect the internals. The screw, connected to the magazine follower, rests at the "7" position when loaded, advancing upward with the follower as rounds are discharged, permitting the soldier to determine his remaining rounds by merely looking at the grip. With this upgrade, the 1902 Lugers were issued to the Cavalry and Light Artillery Boards at Ft. Riley, Kansas, on April 19, 1904 for field testing. Issuing their final report on July 4, 1904, the Cavalry Board recommended that these Lugers not be adopted for service. Because of this rejection, a new set of trials would be called in 1905, which eventually led to the development and adoption of the U.S. 1911 pistol. Blade front and notch rear sights, with the "fat barrel" profile, American Eagle on the chamber, recessed breech bolt, dished toggles with the toggle lock on the right side, as produced during this time frame, and "DWM" on the toggle link. High polish rust blue finish overall, with straw colored lock bolt, trigger, magazine release ejector, extractor, toggle lock and safety lever which is polished bright under the "safety position". The grip screws and pins have a niter blue finish. The pistols have a grip safety with the first model thumb safety lever. Matching full numbers on the barrel and frame, with matching partial numbers on the latch, side plate, trigger, toggle links, extension, and breechblock. Checkered walnut grips with the Powell Device, and a properly fitted nickel magazine with wood base and nickel accent discs. Includes a brown leather flap holster, which was united with the pistol and bears the stamp of the Ordnance Corps on the flap. As explained in an accompanying letter of provenance, this pistol was purchased directly from Springfield Arsenal by Donald Whittemore, subordinate to Colonel Glenn P. Wilhelm and Springfield armorer during WWI. Whittemore placed the pistol in storage, where it remained for over 50 years, thus explaining the superb condition of this piece. Writer is familiar with the discovery of this extraordinary Luger.

Excellent plus, as issued, with over 99% of the original blue finish, showing only the smallest amount of minor handling marks overall. Grips are excellent with some minor yellowing of the correct original celluloid cartridge window and very crisp checkering. Holster is very fine, showing a few minor scuffs. Mechanically excellent. The Crown Jewel of Luger or American Martial Automatic Pistol collecting. Provenance: The Putnam Green Collection, The Gabe Lawson Collection. 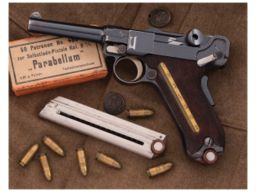 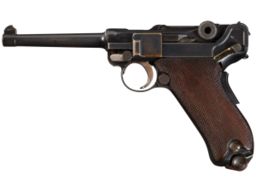 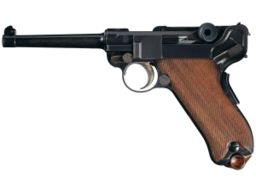 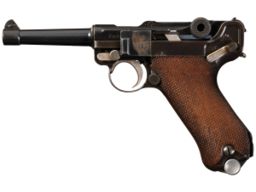 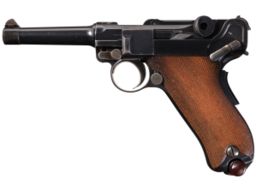 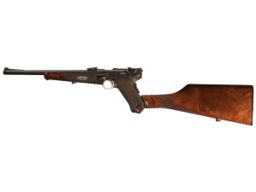