One of the many notable products of American arms designer Eugene Stoner (of AR10, M16/AR15, and AR-18/180 fame, among others), the genesis of the 63 was in the early 60s, shortly after his departure from Armalite. Working with Cadillac-Gage's establishment in Costa Mesa, California, Stoner developed a modular weapon system, intended to be capable of a radical degree of customization at the field armorer level, creating a receiver that could be reconfigured rapidly for mission and environment; while a number of modern weapons designs have touched on this sort of flexibility, this was an exceptional capability for the era. Developed with an eye for military sales, the 63/63A was issued on a trial basis in multiple configurations to the United States Marine Corps and select elements of the Navy SEALs and U.S. Army Special Forces operating in Southeast Asia. The system was not adopted for general use; while it had many virtues, and was considerably refined with user feedback, it was more complex and maintenance intensive than the M16 rifle. While development stopped in 1971, the design found fans among America's elite units, especially the Light Machine Gun configuration; the Stoner LMG gave belt-fed firepower and suppression ability at a significantly lower weight than the standard M60 machine gun, which meshed well with highly mobile small unit tactics. Around 4000 are believed to have been made in total, many of which were destroyed after the 63A was replaced by the M249 Squad Automatic Weapon. Post front and flip-up peep rear sights, the former mounted immediately behind the bird cage flash hider and the latter installed on the combination receiver cover and feed mechanism, with "JK DEVCO INC./HOUSTON, TX." etched on the gas tube, and a ventilated receiver. A quick-release lever ahead of the cover allows rapid detachment of the barrel, with a non-reciprocating charging handle on the underside of the forearm, a detachable bracket for holding ammunition boxes, and the model markings on the underside of the receiver. The trigger group is fitted with a checkered pistol grip and a straight buttstock with a "STONER/63" marked buttplate with an ambidextrous selector switch marked "SEMI" and "AUTO" (fires open bolt full auto in all positions). Included with the lot is one 100-round black plastic ammo box, marked for Cadillac Gage's establishment in Warren, Michigan, which in turn contains a number of disintegrating links.

Excellent, with 95% of the original black phosphate finish, showing some light handling marks overall, and some minor edge wear on the receive. The stock shows a few light scuffs. Mechanically excellent. NOTE: This weapon is a restricted, National Firearms Act (NFA) Class 3, Fully Automatic Weapon, that is registered with the Bureau of Alcohol, Tobacco, Firearms and Explosives (BATFE) under the provisions of 18 U.S.C. Chapter 44 and 27 CFR part 478. This weapon is currently registered as being "LIMITED TO USE AS A SALES SAMPLE (Pre-86)" and as such can only be purchased by an FFL, with a Class 2 or Class 3 SOT License. 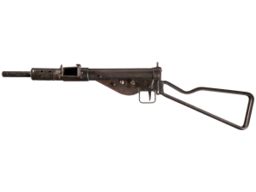 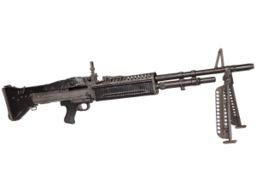 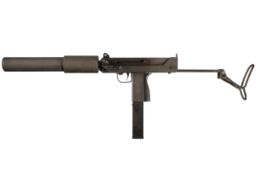 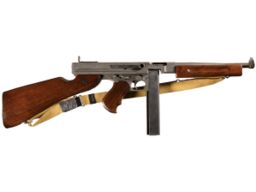 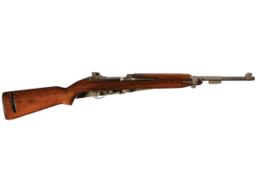 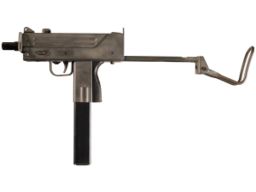