This certainly has to be one of the most unique and historical "gang" related semi-automatic pistols that we have ever sold, including those used during the old west. Obviously every one knows who Al Capone was and how his career in crime shaped the American society in the 1920s and 1930s. "Big Al" or "Scarface," as he was called by his friends, was probably the biggest crime figure or gangster that there ever was. He ran mob organizations throughout the Midwest, centered in Chicago, that stretched from the Canadian border to Kansas and Missouri and had ties to both the East and West Coast Mafia syndicates. He was credited with the killings of hundreds of rivals during the 1920s and early 1930s until his conviction on tax evasion charges in 1933. This pistol is accompanied by two notarized letters or statements of fact, one from the widow (Lucille Kahn) of the crime syndicate reporter Karl Kahn and the other from the current consignor, along with two articles written by Kahn related to Capone’s trial. Kahn's articles discuss Capone's career and the train ride that Capone took after being convicted in federal court and sent to the federal prison in Atlanta, Georgia. Karl Kahn was a well known crime reporter throughout the 1920s, 30s, and well into the 1940s. He worked for the "Chicago American" and wrote several newspaper articles as well as authored articles in the magazine "The Real Detective" on Capone's life and career in crime. During this time "Real Detective" was probably the best and most read magazine on crime in America until the 1960s when it was eclipsed by "True Detective". In these articles Mr. Kahn was very kind in describing the exploits of Capone and as such was allowed to accompany Capone on the train trip to the federal prison where he was allowed to interview him. As explained in the first notarized letter from Kahn's wife, the pistol was given to her late husband (Karl Kahn) prior to Capone being convicted in federal court, probably due to his kinder articles on Capone's life. The pistol itself is an early Colt 1908 semi-automatic pistol chambered in Colt .380 with the very desirable nickel plated finish and checkered walnut grips with Colt silver medallions at the top of each grip. The serial number of the pistol places production in 1912. The right side of the slide has the standard two line Colt markings of "COLT AUTOMATIC/CALIBRE .380 HAMMERLESS" and the left side has the standard two line patent and address markings with the Rampant Colt behind the slide serrations and the serial number on the right side of the frame. The pistol is complete with one blued magazine along with the notarized letters and newspaper articles. An excellent documented and very historical Colt 1908 Hammerless pistol.

Excellent with 90% of the frosted original factory nickel plated finish and some minor edge and high spot flaking, with one large area on the very left front edge of the slide that's about 1/8 inch wide. The rest of the actual pistol has great nickel finish that has just oxidized a little overall. The grips are in very good with nice checkering, showing even wear from actual use. Mechanically fine. 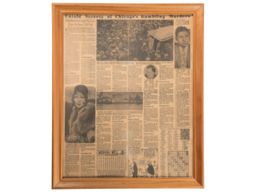 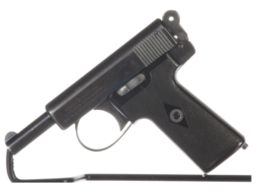 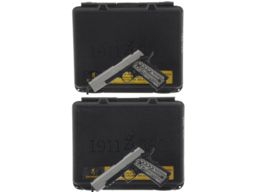 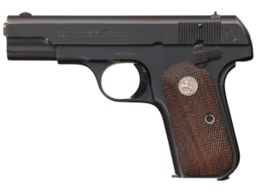 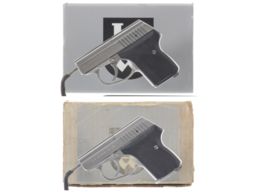 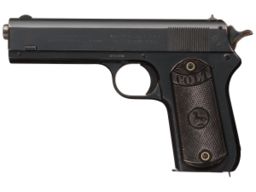