The L.E. Tucker Navy of Lancaster, Texas, is without a doubt the rarest of all Confederate manufactured Civil War revolvers. Offered here is one of only three Tucker Navies known in existence, with this example being recently discovered. The accompanying 33 page consultation report written by noted Civil War appraiser, dealer and Confederate Revolver expert John Sexton identifies and authenticates this historic Confederate revolver. Sexton writes, “In summary, the subject revolver is original and authentic in every regard and my conclusion is that it is a product of Leban E. Tucker of Lancaster, Texas which would make it only the 3rd known example of an L.E. Tucker associated Confederate navy revolver.” Sexton observed several “distinctive characteristics” this revolver shares with both or one of the two other known authentic Tucker Navies. (As listed in Sexton’s analysis, the two other surviving Tucker Navies are numbers 79 and 59. However, number 59 is correctly identified as serial number 52 from the renowned Carl Metzger collection at Texas A&M University in William Gary’s “Confederate Revolvers” on page 157.) The shared characteristics include the following: 6 land and groove rifling; punch mark on the end of plunger screw, though the plunger screw enters from the opposite side on this revolver and this revolver has an additional punch mark on the loading lever screw; cherry grip; “thin and well-made” back strap with “comparable file marks”; insert blade front sight; similar edge beveling on the barrel housing, frame and trigger guard; “’loading notch’ apparently added after manufacture”; “virtually identical” barrel and barrel housing dimensions; and “other dimensions are similar in frame and cylinder,” as the revolvers are “slightly larger than [the] Colt Model 1851.” Sexton noted, “Wedge appears contemporary but unique in form, unique in that no wedge screw mortise was cut” and speculated that the revolver was “rushed out of production with [a] makeshift wedge and no retaining screw.” The loading lever catch is pinned, a feature “not noted on any other Confederate revolvers.” The serial number “1” appears on the flat of the loading lever, and there are no other markings. Sexton noted that the “1” stamping is similar in “the same font and size” to the die used on Tucker & Sherrard dragoons and the “very squared off nipple mortises” are typical to other Tucker firearms. The rear sight sits in a dovetail, a distinguishing feature not found on the other known Tucker Navies. Sexton proclaimed that this revolver could be the “only noted Tucker associated revolver known with rear sight of any configuration” and speculated that this revolver was the subject of a February 28, 1863 article in the Austin newspaper Texas Almanac. The newspaper described its viewing of a representative example of a Tucker & Sherrard Revolver provided by Colonel John M. Crocket (former Mayor of Dallas and Lt. Governor), who at that time was an official representing the firm of Tucker, Sherrard & Company. The newspaper described the revolver “as quite equal to the famous Colt’s six shooter, of which it is an exact copy, with the exception of an extra sight on the barrel which we think is a definite improvement.” This article is reprinted in Stephen B. Oates’ “Confederate Cavalry West of the River” on page 68 and Albaugh, Benet, and Simmons’ “Confederate Handguns” on page 203. All Confederate arms are scarce and related primary historical sources are just as scarce, leaving the field of Confederate arms collecting extremely challenging even for the most astute scholar. The limited number of surviving examples means they continue to garner high prices at auction and remain among the most prized pieces in many stand-out collections. The history behind the Tucker Navy is no different, made even more daunting by the extremely limited number of surviving revolvers to study. A chapter in Gary’s “Confederate Revolvers” is dedicated to Tucker Navies. Based on Gary’s research, gunsmith and dealer Leban Tucker arrived with his family, including his two sons, Argyle and Elihu, in Lancaster, Texas, in 1862 from Marshall, Texas, and quickly established the gunmaking firm Tucker, Sherrard & Co. Tucker withdrew from the firm shortly after it signed a contract with the Confederacy for 1,500 Dragoon type revolvers and 1,500 Navy type revolvers, but remained as a paid employee for some period. The firm then operated under the name Sherrard, Taylor & Co. until the name changed to Clark, Sherrard & Co.. Several Civil War Dragoons produced under the aforementioned names have been well-documented in numerous publications. Over the years, several theories developed as to when the Tucker Navies were manufactured. In “Confederate Handguns,” the authors state the revolvers were “possibly made” while Tucker resided in Marshall. Gary came to a similar but more definitive conclusion: “There seems little doubt that the L.E. Tucker & Sons revolvers were the forerunners of the Tucker and Sherrard revolvers, which in turn were the forerunners of the Clark and Sherrard revolvers.” In his 1877 biography on L.E. Tucker, H. Smythe proclaimed that the Navies were made in Weatherford, Texas, in 1863/64. Sexton concluded that the date of manufacture was “most likely” 1863 and production was in Marshall. Still other texts cite different production dates and locations. While the date of manufacture and production location are still up for debate, the exact number of how many of these wartime Navies were produced remains unknown. Nevertheless, Tucker Navies were certainly produced in a very limited quantity and mark the beginning of the nearly mythical Confederate pistol factory at Lancaster, Texas. For those who aspire to complete a collection of Confederate Arms or Arms of Texas origin and history, this is probably a single lifetime opportunity to acquire such a documented rarity.

Very good, well above average for a Confederate handgun. The revolver has a smooth dark brown patina overall with the cylinder retaining unidentified period heat blue finish. The brass grip straps have an aged appearance with areas of darker patina. The grip is fine with a series of dings on the bottom, otherwise some minor handling marks and high edge wear. Mechanically needs work as hammer has a hair hold at the half cock position and the cylinder is slightly out of time and occasionally does not lock. As one of only three known authentic Tucker Navies, this serial number 1 revolver is a must have to complete even the most advanced public or private Civil War collection. This is a once in a lifetime opportunity to acquire the rarest of the Texas made Confederate small arms. 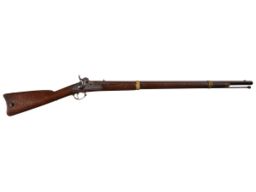 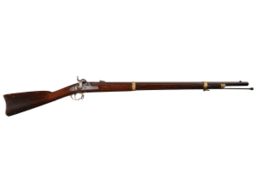 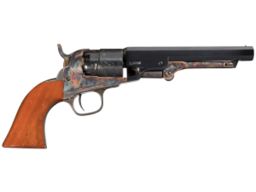 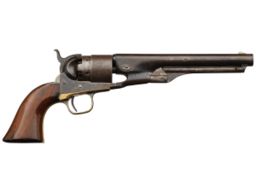 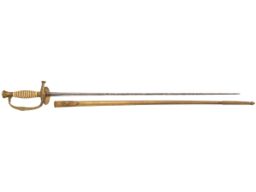 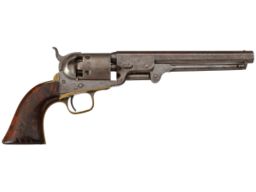