From the late 1880s to the early 1900s self-described “American multinational luxury jewelry and specialty retailer” Tiffany & Co. advertised some of the period’s most spectacular and expensive highly embellished weaponry for America’s leading firearms manufacturers including Colt, Winchester and Smith & Wesson. “Revolvers of the most improved types, mounted in silver, carved ivory, gold, etc. with rich and elaborate decorations,” proclaimed the Tiffany Blue Book catalog, would set a customer back $50.00 to $300.00. The number of surviving Tiffany firearms remain unknown, but studies clearly show that S&W benefited the most from Tiffany’s world renowned master craftsmanship. Without a doubt Tiffany embellished Colts are much rarer than their S&W counterparts. While Tiffany did limited work for Colt starting in the 1860s, no work of this magnitude was executed until the 1890s. The largest public display of Tiffany embellished 19th century arms can be viewed at the Metropolitan Museum of Art in Gallery 372. The lion’s share of the display was donated and/or sold by Dr. Gerald Klaz. These highly stylized arms were often intended to be showpieces for the World's Columbian Exposition of 1893, the Exposition Universelle in Paris of 1900 and the Pan-American Exposition in Buffalo, NY in 1901. As identified by its assembly number “795”, this Colt revolver is pictured and described in R.L. Wilson’s “Book of Colt Firearms” on pages 338 and 368 and “The Book of Colt Engraving” on page 172. The etched silver bag shaped grip is signed “TIFFANY & CO./STERLING/T.” The “T” marking was used by Tiffany from about 1891 to 1902. Like most major firearm manufacturers of the time, engravers were not allowed to sign their own work. Amazingly, Tiffany was allowed to mark the piece made on special order as well as those made for private customers. The grip depicts a highly detailed, profuse etched battle scene of the French Foreign Legion engaged with Arabian adversaries. The grip is attached to the revolver by a total of four screws (two screws on each side of the frame). The barrel, cylinder, trigger guard and remaining exposed frame surfaces feature fine engraved floral scrollwork on a punch dot background. A floral motif is engraved on the top strap. In “The Book of Colt Engraving,” R.L. Wilson was of the opinion that the engraving was “contemporary” and “may have been the work of Tiffany; gun has old refinish making further speculation difficult.” Nevertheless, the quality of the engraving is most certainly equal to Tiffany’s signed grip etching, and it is our judgement that the engraving and etching were both done by Tiffany. Amongst the scrollwork on the barrel is the three-line address/patent dates marking on top and “COLT D.A. 38” on the left side. The barrel markings are faint. The assembly number “795” is found on the cylinder latch, frame and crane. The grip is sterling silver, the hammer and trigger have a niter blue finish, and the remaining surfaces are plated in nickel. The accompanying case is pictured in the “Book of Colt Firearms” on page 368, and as proclaimed by R.L. Wilson, the casing “itself is an unusual and scarce, as is the revolver.” The exterior of the wooden case is covered in dark red leather and the interior is lined in chamois. The interior is recessed for the revolver and a box of cartridges (not included).

Extremely fine, retaining most of the period replated nickel with some flaking on the cylinder release and some pitting under the finish (mostly on the barrel). 90% of the niter blue remains in the hammer and trigger. The silver grip is taking on an attractive age appearance and the fantastic Tiffany etching is crisp. Mechanically excellent. The case is fine with some minor handling/storage marks on the exterior and typical high spot wear, some staining and a tear in the hammer recess on the lining. An extremely rare, well documented example of a Tiffany masterpiece housed in an equally rare casing. A must have for the serious Colt or firearms art collector. Provenance: Robert Q. Sutherland collection and Dr. Gerald Klaz collection. 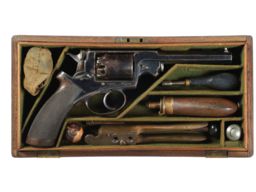 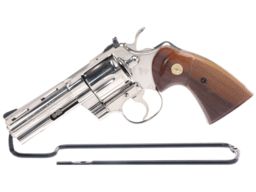 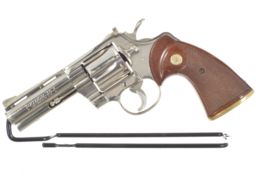 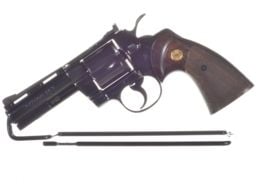 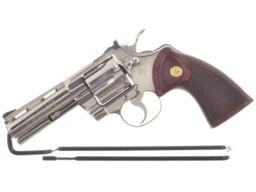 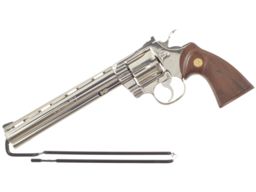