No. 1 1/2 Second Issue revolvers were manufactured in 1868-1875 and are important elements of any comprehensive Smith & Wesson collection. Engraved, special plated, and presentation No. 1 1/2s are comparably rare and especially valuable historical artifacts, especially those with documentable presenters and recipients like this one. The case plaque is inscribed "Presented to/DR. WM. F. FLUHRER/of/the New York Park Hospital/by/P. ADOLPHE NORMANDEAU/as a slight token of Esteem and/gratitude for the Professional and/friendly attention of which he was the recipient/on the night of Novr. 20th 1873." The silver-gilt finish may have been executed in the shop of the presenter given Pierre Adolphe Normandeau, a Canadian by birth, is recorded as a gold, silver, and nickel plater and fire guilder at No. 50 Ann Street in New York City. Among the items listed as plated in his shop are firearms, including handguns. Dr. William Francis Fluhrer (1846-1932) is listed in period sources as a professor of clinical surgery in the New York Post-Graduate Medical School and Hospital as well as a surgeon in New York hospitals. Among his publications is "An Inquiry into the Principles of Treatment of Broken Limbs" and "A Successful Operation for the Extraction of a Pistol-Ball from the Brain," the latter detailing his procedure for removing a bullet from the head of a man who had tried to take his own life. His wife, Emma Pullman Fluhrer, was the youngest sister of George Pullman of Pullman Car Company fame. Dr. Fluhrer was also "Boss Croker" of Tammany Hall's physician. He was reportedly called upon to attend to President McKinley when he was shot at the Pan-American Exposition in Buffalo, New York. In 1873, he was just three years out of Bellevue Medical College and was a resident physician and surgeon at Park Reception Hospital in New York. He was an accomplished surgeon even early on in his career as detailed in multiple period articles concerning his talents saving broken limbs. The details of the two men's interaction on the night of November 20th, 1873, have not been found, but it is presumed that Dr. Fluhrer provided medical services, possibly surgery, for Normandeau. He may have even saved Normandeau's life. Clearly the latter strongly appreciated the doctor's work given this incredibly fine revolver. The revolver has near full coverage exhibition engraving by L. D. Nimschke consisting of scroll, floral, shell, crosshatch, and border engraving. The left grip has an inverted raised relief carved "WF" monogram. The grip screw is blind, and the right panel is smooth. The top of the barrel rib has the Smith & Wesson address and patent markings. "S 5" assembly markings are on the barrel and cylinder, and the butt has the serial number. The desktop style leather-bound case also has a full cartridge block inside.

Very fine with slightly fading original gold and light aged patina on the underlying silver plating, some pricking mainly along the back strap and extractor pin, crisp engraving and markings, and minor age related wear overall. The grips are also very fine and have attractive natural colors, crisp carving, and minimal wear. Mechanically excellent. The case has minor wear at the edges but is otherwise also very fine. This is a beautiful revolver in its own right, the Nimschke engraving, deluxe presentation inscribed case, and special monogram grips tying it to a prominent New York physician certainly adds to its historical interest and value. Truly a fabulous one of a kind Smith & Wesson! Provenance: Dr. Gerald Klaz collection. 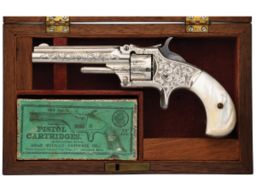 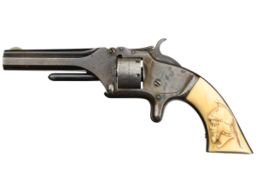 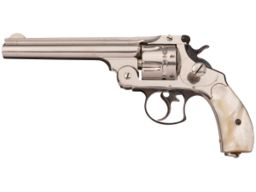 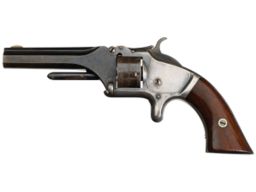 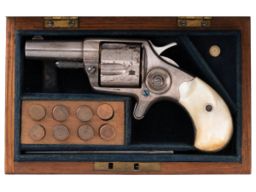 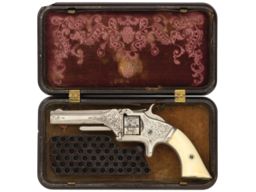