Developed in 1939 and 1940, the Smith & Wesson Light Rifle was a contender for military contracts with both the British and the Americans and squared off against the M1 Carbine as a pistol substitute for officers and support personnel. Baring more similarity to an inter-war era SMG design, the Light Rifle operated in a semi-automatic open bolt mode, with a novel dual-purpose magazine well and ejector port that gave the Rifle a very distinctive profile while also sending spent cartridges straight down to the ground, which would ease use in close formations, tight quarters, and by left-handed users, as well as a synthetic stock to reduce weight and give improved resistance to temperature and humidity changes. At trials, the weapon was promising enough to merit a Mark 2 model, but the lighter M1 Carbine and the more cost-effective Sten and M3 SMGs would win the day. Large numbers of the Light Rifle were destroyed, both during testing and afterwards, including a reported incident of the British cutting their Light Rifle samples up with a blowtorch and tossing the resulting scrap into the English Channel. According to the Smith & Wesson historian, in 1974 Smith & Wesson found a limited number of unfired 1940 light rifles packed in crates. These were classified as Curio & Relic items and sold as collector's pieces. According to Jinks on page 240 of "History of Smith & Wesson," 137 Mark I rifles were found along with 80 Mark II rifles. The front sight is a fixed blade, and the rear sight is an adjustable notch, with the one-line patent markings on the right side of the receiver, the two-line Smith & Wesson address on the left, and the S&W logo on the left rear opposite the safety switch. The buttstock is fitted with a serrated steel buttplate, which is numbered to match the receiver. Includes non-factory storage case, two extra magazines, and correct original leather sling.

Excellent with 98% plus bright original blue finish remaining, some scattered small scratches, and a trace of faint edge wear visible at the muzzle. Stock is also excellent with light handling marks. Mechanically excellent. 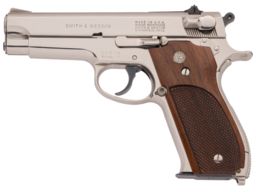 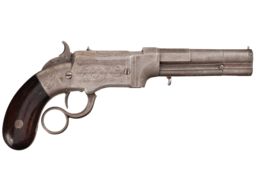 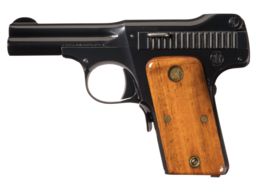 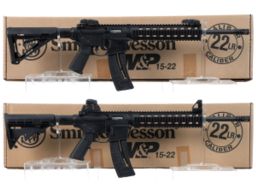 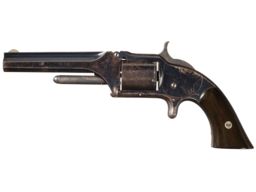 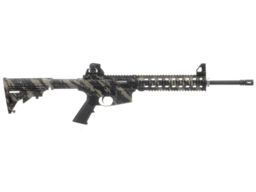