As the most powerful big bore Model 1886, the .50/100/450 Express has held a special place in the hearts of Winchester collectors and have remained a highly sought after dangerous game rifle in any condition. With only 331 manufactured, there are hardly enough surviving Winchester "Big Fifty" Model 1886s to meet demand. Offered here is the first Model 1886 Winchester manufactured in .50/100/450 Express, making this high condition specimen a holy grail in big bore Winchester collecting. The included factory letter lists this rifle with an octagon barrel in .50/100 caliber, set trigger, plain pistol grip stock, Lyman front and rear sights and hard rubber buttplate when it was received in the warehouse on January 13, 1894 and shipped on January 18, 1894. Based on research compiled in an included treatise by Jim Paul and Tom Adams, this rifle is the first Model 1886 documented in Winchester factory records to be chambered in .50/100/450 Express. The researchers also stated that there was only one out of the 331 factory documented Model 1886s that left the factory with a 32 inch extra length barrel chambered in .50/100/450 Express. Note that the factory letter for this rifle does not list barrel length and was therefore missed in the study that relied on "microfiche copies of the original Winchester records which are stored at the Buffalo Bill Historical Center in Cody, Wyoming." Nevertheless, the 32 inch barrel in .50/100/450 Express is extremely rare. The rifle is equipped with a combination Beach front sight, three leaf rear sight and folding tang peep sight. The top barrel flat is stamped with the two-line address ahead of the rear sight and "50 EX" at the breech. The lower tang is stamped with the two-line patent dates marking as well as having the serial number. As stated in the factory letter, the action is fitted with a set trigger, a feature, according to Paul and Adams, that is factory documented on only 15 Model 1886s in .50/100/450 Express. The barrel, magazine and bolt are blued, the loading gate is niter blue, and the remaining surfaces are casehardened. The forearm and pistol grip stock are nicely figured plain walnut. The pistol grip has an ebony insert. The buttplate has a hard rubber shotgun Winchester buttplate. In an accompanying letter noted firearms collector and dealer Herb Glass Sr. called the rifle a "choice rarity in the Winchester field" and recounted the provenance. "I discovered this gun in 1970," wrote Glass, "and immediately sold it to Richard P. Mellon. It remained in the Mellon collection for 10 years and in 1980, I took it in trade and sold it almost immediately. It is 100% original and you may well be proud to have it in your collection."

Very fine. The barrel and magazine tube retain 85% original blue finish with thinning to brown on the balance. 95% original blue remains on the bolt. 60% original niter blue remains on the loading gate. The forend has silvered out with traces of original case color patterns remaining. The 70% vivid original case colors remain on the frame. 50% original case colors remain on the hammer and lever. The wood is also very fine with minor dings and scratches and retaining most of the original finish. Mechanically excellent. Do not miss your chance to acquire Winchester's first "Big Fifty" Model 1886! The historical significance, highly sought after .50/100/450 Express chambering and condition make this rifle a must have for the serious Winchester collector! 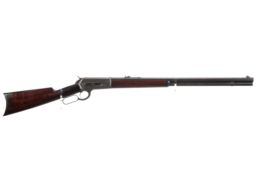 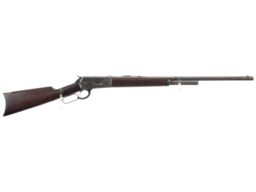 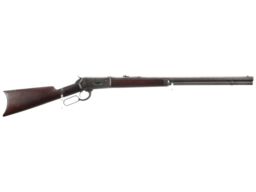 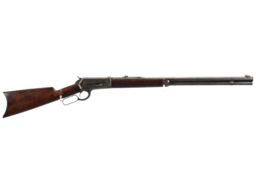 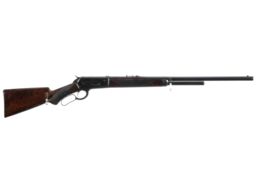 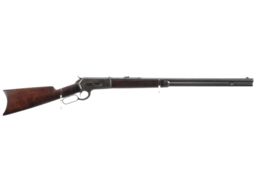